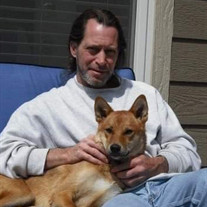 For those of you who would like to view the Live Stream of the Memorial Service please click here It is with much sadness that the world has lost Douglas Karl Hodes who passed away peacefully on Monday, October 12, 2020, after a heroic year-long bout with cancer. He was 60 years old. He was born on April 15, 1960 to Richard and Alice Hodes of Toledo. He leaves behind his sister, Connie Hodes, and his brother, Chris Hodes, two Aunts, many cousins as well as extended family siblings. He also leaves a son, Phillip, and two grandchildren who were recently made known to him. His childhood and teen years were spent growing up in the Old Orchard neighborhood. He enjoyed playing outside and had a precocious nature about him. He enjoyed tinkering--building model cars and planes, go-carts, mini bikes. As such, he developed an uncanny ability to deconstruct and reconstruct anything. This ability led to self-taught mechanical, plumbing, electrical and carpentry aptitudes. He was a Boy Scout and a member of the First Congregational church and the P.F. Flyers. He enjoyed annual vacations to the Hiawatha Sportsman's Club in the U.P. of Michigan fishing, playing outside in the woods and waters. He was also a very clever practical joker. He attended DeVilbiss High School from 1974 to 1978 where he developed wonderful artistic abilities. In H.S. he was asked along with others to paint a mural on the H.S. wall as part of a class art project. He was very proud of the work. He had a large group of friends from H.S. and the church. Except for a few years living in Colorado and Michigan, Doug lived out his adult life in the Old West End of Toledo where he enjoyed life as it unfolded. Much of his time was spent working on the classic cars he collected. The Old West End was his home. He loved his neighborhood, especially participating in the Old West End festival each year. His talent and abilities were only outweighed by his kind and giving nature. He was not a man of great means but what he gave to others came from the size of his heart. Whether family, extended family, friends, or acquaintances, Doug took time with little gestures of love that folks remember. He helped with your car repairs, home repairs, landscaping, or if you needed anything artistically created. He had many friends he came to know through his acts of kindness. His playful and quirky sense of humor were infectious and made impacts on so many people's lives. Doug loved animals, especially his cats that he would take in over the years. He worked for a variety of employers including The Van Connection, U-Haul, Calphalon, and most recently performing car customization at Alex Motors in Toledo. He will be missed by many. May God rest his soul. The family will arrange a memorial for Doug to take place on Saturday, November 14, 2020, in the Toledo area. Details to be posted later so check back here or on Douglas Hodes' Facebook page. Please feel free to reach out to Chris at [email protected] or Connie at [email protected] to RSVP or leave notes about your Dougie experiences.

For those of you who would like to view the Live Stream of the Memorial Service please [click here]https://vimeo.com/486451118 It is with much sadness that the world has lost Douglas Karl Hodes who passed away peacefully on Monday, October... View Obituary & Service Information

The family of Douglas Karl Hodes created this Life Tributes page to make it easy to share your memories.

For those of you who would like to view the Live Stream of the...

Send flowers to the Hodes family.