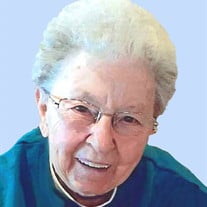 Dorothy M. Tomasik, a beloved mother, grandmother and great-grandmother, an accomplished cook and an advocate for children and literacy, died February 21, 2018, at age 86. Dorothy was born on December 8, 1931, in Bayonne, N.J., to Walter Sr. and Sophie Botwin. She had a loving and happy childhood and she liked to dance and rollerskate. Dorothy was graduated from Bayonne High School and worked for Woolworth’s and Western Electric. In 1954, Dorothy married Leonard Tomasik, a U.S. Army veteran of the Korean War and they had two children, Mark and Karen. Dorothy and Leonard were married for 62 years. The family moved from Bayonne to Toledo in 1970. Dorothy was a Toledo resident for 48 years and was proud of her adopted hometown. Dorothy became manager of the Art Supply store at the Toledo Museum of Art and earned the praise and respect of co-workers and students. Dorothy also was known for her home-cooked meals, especially soups and chili and Polish specialties such as pierogi, stuffed cabbage, stuffed peppers, kielbasa with sauerkraut, pastries and potato pancakes. An avid reader of newspapers, books and magazines, Dorothy supported and enjoyed the Toledo Lucas County Library. She also liked Metroparks of Toledo, especially Side Cut Park in Maumee. She was a member of St. Joseph Catholic Church in Maumee and St. Patrick of Heatherdowns Church. Dorothy supported numerous educational causes. She established the Leonard J. and Dorothy M. Tomasik Fund through the Toledo Community Foundation to aid literacy for children. She was kind, caring and generous and she had a great sense of humor. Dorothy was predeceased by her husband, Leonard; her parents, Walter Sr. and Sophie and her brothers, Walter Jr. (known as Eddie) and Robert. She is survived by her son, Mark (Diane) Tomasik; daughter, Karen (Anson) Schultz; grandchildren, Ryan (Lindsey) Schultz, Meredith (Rick) Caswell and Caroline Schultz; cherished great-grandchildren, Ainsley Schultz, Benjamin Caswell and Declan Schultz. Friends may visit at the Coyle Funeral Home, 1770 S. Reynolds Rd., on Monday, February 26th from 5-7 p.m. A Funeral Mass will be held on Tuesday, February 27th at St. Joseph Church, 104 W. Broadway Street, Maumee, OH 43537 at 10:30 a.m. Interment will be private. In lieu of flowers, the family requests donations in honor of Dorothy be made to the Leonard J. and Dorothy M. Tomasik Fund through the Toledo Community Foundation, 300 Madison Avenue, Suite 1300, Toledo, OH 43604. Please view and sign our online “guest registry” at CoyleFuneralHome.com

Dorothy M. Tomasik, a beloved mother, grandmother and great-grandmother, an accomplished cook and an advocate for children and literacy, died February 21, 2018, at age 86. Dorothy was born on December 8, 1931, in Bayonne, N.J., to Walter... View Obituary & Service Information

The family of Dorothy May Tomasik created this Life Tributes page to make it easy to share your memories.

Send flowers to the Tomasik family.