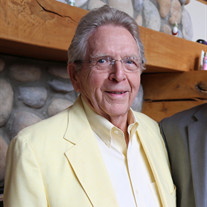 Donald James Yark passed away peacefully on Thursday, November 21, 2019 at Ohio Living Swan Creek in Toledo after a brief illness. He was 98. Don was a lifelong Toledo area resident, born to Herbert and Mabel Yark on August 29, 1921. He lived a long and colorful life, caring for his family, including his dear mother who lived to the age of 104. Growing up in the hardscrabble days of the Great Depression, Don instilled values of hard work, pride and service in his children who, among their varied accomplishments, went on to build Northwest Ohio’s largest automotive group. A graduate of both DeVilbiss High School and the University of Toledo, Don enlisted in the U.S. Army Air Corps in 1944 and served primarily in India during World War II. In 1944, Don married the love of his life, Marilyn Shuey and settled in the Old Orchard neighborhood where they lived for many years with their three children. He spent his career in civil engineering consulting for Finkbeiner, Pettis & Strout, and was later the Director of Public Utilities for the City of Toledo. Later, he founded DJY and Associates Custom Builders, designing family residences including a home for Marilyn and himself in Sylvania Township. In semi-retirement, he took up a second residence in Sandusky, which became a cherished family outpost on the shores of Lake Erie. Don was an avid baker, breads in particular and was also known for his delicious caramels which he baked well into his 90s. He pursued all kinds of projects from making personalized birthday cards to tinkering with computers. He was a playful presence on email with his friends and family. In later years, he took up landscape painting to much enjoyment. Among the various organizations to which Don was a member were the Royal Order of Jesters, and Zenobia Shriners. He was also a 32nd degree member of the Masons. Don is survived by his children Lynn (Dick) Baker; John (Karen) Yark; daughter-in-law, Susan Poll; and grandchildren Scott Baker, Laura Wilkinson, D.J. Yark, Dan Yark, Bill Yark, Emily Reny, Jack Yark, Jamie Yark, Jay Yark, Jennifer Beaudoin and Kim Nelson; and 15 great-grandchildren. He was preceded in death by his beloved wife, Marilyn; son, Jim; granddaughter, Shelly Butler; and siblings Herbert Jr. and Marjorie. A private family celebration of Don’s life will be held at a later date. The family suggests tributes be made to the Alzheimer’s Association of Northwest Ohio or Hospice of Northwest Ohio. Please view and sign our online “guest registry” at CoyleFuneralHome.com

Donald James Yark passed away peacefully on Thursday, November 21, 2019 at Ohio Living Swan Creek in Toledo after a brief illness. He was 98. Don was a lifelong Toledo area resident, born to Herbert and Mabel Yark on August 29, 1921. He lived... View Obituary & Service Information

The family of Donald James Yark created this Life Tributes page to make it easy to share your memories.

Send flowers to the Yark family.