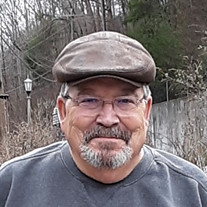 Donald David Howard died in the early hours of September 12, 2021 at Pardee Hospital in Hendersonville, North Carolina at the age of 73. Don was born on August 8, 1948 in Toledo, Ohio to Donald and Kathleen (Weaver) Howard. He attended Maumee High School and then served in the United States Army for three years. He started working at The Andersons in Maumee as a teenager and returned after his military service to start his forty-one years in Mechanical Maintenance in the Lawn and Fertilizer Department. Moving through many years of shift work, he most enjoyed the planning and supervising of building their Professional Turf and Horticulture plant just before he retired in August of 2011. After sixty-three years in Maumee, Don began retirement at his beloved Sweet Lake in Sturgis, Michigan. Life led him to Goshen, Indiana for a short time to be followed by a much anticipated move to the beauty and energy of Hendersonville, North Carolina. Over the years Don immersed himself into passions that included wood working, fishing, and stained glass. Don's irreplaceable mechanical knowledge made him the go to guy for family and friends. Some of his greatest joys were sitting in the sunshine by the pool while his grandchildren swam and hosting summer family trips to the mountains. Don is survived by his high school sweetheart and wife of fifty-two years Julie Wallace Howard, three siblings, Jeanne Heise, Susan Keller, and Debra Teetrick; three daughters, Tracy Anderson, Emily Howard, and Amanda Cutway; eight grandchildren, Kyle, Maggie, Kevin, Trevor, Morgan, Zachary, Victoria, and Chloe, and one great grandchild Brayden. He tried very hard to make fisherman of them all. Family and friends will be received at Coyle Funeral Home, 1770 S. Reynolds Rd, Toledo on Monday, September 27 from 4:00 - 7:00 pm. A Memorial Service will follow at the funeral home beginning at 7:00. In lieu of flowers, memorial contributions may be made to The Toledo Humane Society, 827 Illinois Ave., Maumee, OH 43537. Please leave a condolence for the family at CoyleFuneralhome.com.

Donald David Howard died in the early hours of September 12, 2021 at Pardee Hospital in Hendersonville, North Carolina at the age of 73. Don was born on August 8, 1948 in Toledo, Ohio to Donald and Kathleen (Weaver) Howard. He attended Maumee... View Obituary & Service Information

The family of Donald David Howard created this Life Tributes page to make it easy to share your memories.

Donald David Howard died in the early hours of September 12,...

Send flowers to the Howard family.