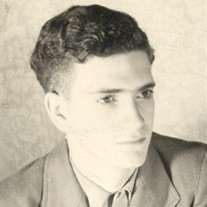 Donald Henry Harding, 90, of Toledo, Ohio passed away on October 18, 2017. Born July 7, 1927, in St. Catharines, Ontario, Canada, Donald was the son of Henry and Margaret (McCance) Harding. Don grew up in Toledo, was a graduate of Woodward High School, and served in the Navy at the end of WWII as an electrician. He also served as a lifelong member of the Church of Jesus Christ of Latter-day Saints and was proud to have helped build the first Toledo chapel. Using his GI bill he attended Brigham Young University, and after returning to Ohio, he took flying lessons and received a small aircraft pilot’s license. Then in 1954 Don went to a dance at the YMCA, found the prettiest girl in the room to be his partner, and 5 months later he married her, Beverly Ann Kille, the love of his life. Together they raised their 3 children. For over 30 years he worked for Schindler Haughton Elevator. After retirement, when Don wasn’t on the golf course, he could be found in his paint room or at the Toledo Artists’ Club creating beautiful artwork in watercolor. He loved to sing whether in his church choir or in his home. He also delighted his grandchildren with making animal sounds and would chatter to the squirrels, meow at the cats, and bark like the dogs. More than anything, Donald loved his family. He is survived by his wife, Beverly; his children, Glenn (Bridget Weaver) and Pamela (Mark) Seely; daughter-in-law, Sally Harding; and his sister, Margaret Davis. Also left to honor his memory are 12 grandchildren and 16 great-grandchildren. He was preceded in death by his son, Keith; brothers, Roy, Bill and Calvin and his sister, Betty Tittle. Friends may visit at the Coyle Funeral Home, 1770 S. Reynolds Rd., Toledo, OH 43614, on Friday, October 20, 2017 from 2-8 p.m. Funeral services will be held at the LDS Chapel, 1545 Eastgate Rd, Toledo, OH, at 10 a.m., Saturday, October 21, 2017. Interment will follow in Toledo Memorial Park. In lieu of flowers, memorials may take the form of contributions to Hospice of Northwest Ohio. Please view and sign our online “guest registry” at CoyleFuneralHome.com

Donald Henry Harding, 90, of Toledo, Ohio passed away on October 18, 2017. Born July 7, 1927, in St. Catharines, Ontario, Canada, Donald was the son of Henry and Margaret (McCance) Harding. Don grew up in Toledo, was a graduate of Woodward... View Obituary & Service Information

The family of Donald Henry Harding created this Life Tributes page to make it easy to share your memories.

Donald Henry Harding, 90, of Toledo, Ohio passed away on October...

Send flowers to the Harding family.