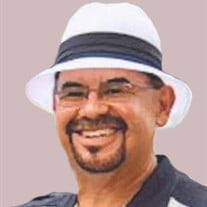 David "The Master" Sanchez, Sr, 66 passed away on August 3, 2021. He was born on December 28, 1954 in Toledo, Ohio to Florentino and Amalia (Arce) Sanchez, Sr. Dave graduated from Perrysburg High School in 1972 where he learned to play the tenor saxophone and was in the marching band. He retired as your #1 Tejano Connection Car Salesperson from Dave White Chevrolet. Everyone who knew Dave knew his love for family, friends and Tejano Music, and his humor! Dave was in several bands starting with Benny Perelas y su Orchestra, and later met two of his lifelong best friends, Ruben Ramos and Dave Gonzales and played in several popular bands together for many years - La Compania Chicana, Electra, and Fuerza Band. Dave played tenor sax and sang three-part harmonies. Dave lit up a room with his smile and humor! He had nicknames for so many and he was given many as well: Pops, Grandpa, El Mas Chingon, Manito, Davito, Candy Dave, and especially, "Uncle Dave, Uncle Dave, Uncle Dave". Dave loved sports and was a diehard Steelers Fan! Always wearing Black and Yellow, which could not be denied when you entered his man cave. He also loved the Detroit Tigers and The Ohio State Buckeyes! Dave loved to travel and made so many memories with his beautiful wife Eva. They loved to go to concerts all over the US traveling with family and meeting up with cousins and friends for a great time, likewise with their close friends here in Toledo! He was preceded in death by his father Florentino Sanchez Sr, his mother Amalia (Arce) Sanchez, his sister Elijia Davila, niece Juliana Ramirez, and nephews Alan Bess and Robert Davila Jr. He's survived by his best friend and wife, Eva (Gonzalez) Sanchez, son, David (Lori) Sanchez, Jr, and daughters, Debra Sanchez (his miracle angel), Alyssa and Sydney Warnke, brother, Florentino (Lynn) Sanchez, Jr, sisters, Gloria Martinez, Marty (Abe) Ledesma, Anita Sanchez-Serda, and Mary Sanchez, as well as six grandchildren, one great-grandchild and many nieces, nephews, great-nieces and nephews; he was greatly loved by all. Friends may visit at the Coyle Funeral Home, 1770 S. Reynolds Rd. on Friday, August 6th from 2:00 p.m. - 8:00 p.m., with his "Celebration of Life" and Scripture Service beginning at 6:00 p.m. The funeral Mass will be held on Saturday, August 7th, at 11:00 am at Blessed Sacrament Catholic Church, 2240 Castlewood Dr, Toledo, OH 43613, with an hour of visitation prior, beginning at 9:30 a.m. Interment will be private. Luncheon will follow the Mass in the church cafeteria. Please view Dave's memorial video tribute and leave a condolence message for the family at CoyleFuneralHome.com.

David "The Master" Sanchez, Sr, 66 passed away on August 3, 2021. He was born on December 28, 1954 in Toledo, Ohio to Florentino and Amalia (Arce) Sanchez, Sr. Dave graduated from Perrysburg High School in 1972 where he learned to play the tenor... View Obituary & Service Information

The family of David Sanchez Sr. created this Life Tributes page to make it easy to share your memories.

Send flowers to the Sanchez family.