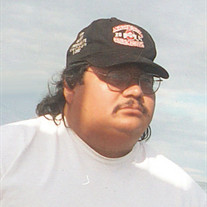 David J. Rodriguez, age 57, of Toledo, Ohio died unexpectedly on Monday, August 6, 2018 at St. Anne Mercy Hospital. He was born in Toledo on April 13, 1961. He is survived by his daughter Francisca C. Rodriguez, her sister Elizabeth M. Pena, and granddaughter Carysa Rodriguez: parents Connie and Jesse Rodriguez; brothers: Daniel Rodriguez, Trinidad J.[T.J.] (Tracy) Rodriguez, Victor Rodriguez; sisters: Susie Rodriguez and Frances Rodriguez; Uncles: Simon (Virginia) Rodriguez, Fred (Dora) Rodriguez; Aunts: Frances Martinez, Carmen (Richard) Barbosa, Virginia Irving, Rosie Geronimo, Liz Geronimo; as well as countless nieces, nephews, cousins and other family members in Ohio, Texas and Michigan who will miss him dearly. He was a 1979 graduate of Macomber-Whitney High School, where he studied auto-mechanics as a student. Shortly after high school, David joined the U.S. Army and traveled to Ft. Leonard Wood, Missouri for basic combat training. Additionally, he served overseas in Germany and Panama. After completing his 4-year term, he was honorably discharged in 1984. Following his military service, he went to work for the Jeep Corporation, which is now the Fiat-Chrysler Automobile (FCA) Group. David was a dedicated employee for 30 plus years at the FCA Group and a dues paying member of the United Autoworkers Union (UAW). Additionally, David was an avid family man. In fact, he not only loved his family, but he would treat all his friends as family too. He loved fishing, listening to classic rock, working on automobiles and was constantly remodeling his home. Furthermore, he was the kind of guy who wouldn’t hesitate to give a hand to anyone who would ask him for his help. A dedicated Ohio State football fan, he loved to wear their colors and root on the team. He was very generous with his time often volunteering with a local Boy Scouts of America troop. He had a unique sense of humor and almost always had a smile on his face. He also loved pets and always had a dog as a constant companion. Family and friends may visit the Coyle Funeral Home, 1770 S. Reynolds Rd, on Friday August 17th from 2-8 pm. Final respects will take place at Coyle at 9 am on Saturday, August 18th, with the funeral processing to Gesu Roman Catholic Church located at 2049 Parkside Blvd for a Funeral Mass at 10 am. Please view and sign the guest registry at coylefuneralhome.com.

The family of David Jesse Rodriguez created this Life Tributes page to make it easy to share your memories.

Send flowers to the Rodriguez family.