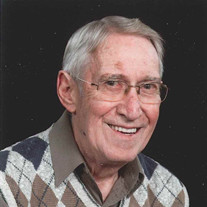 David H. Markle, Jr, 85, died October 20, 2017 at Hospice of Northwest Ohio in Toledo, surrounded by his loved ones. Dave was born Oct 7, 1932 in Malta Ohio to David and Mary (Carr) Markle. Dave earned his BS in Education with a Music major from Ohio Northern University, followed by an MA from Ohio State University. Upon leaving OSU, he joined the U.S. Army for a 2-year stint in the Signal Corps, serving in Alaska. Following his time in the military he started a 37-year career in the Rossford and Perrysburg School systems as a music teacher, guiding generations of young people to an interest and love of music and musical performance. Dave’s particular talent was helping people to find the highest use of their own musical talents. He spent many summers leading children through theatre and young opera workshops. He believed in the higher power of God, and served as organist and choirmaster at six separate churches of many different denominations. His love of music extended well beyond the professional. He was a founding member of the Maumee Community Theatre as well as spending time with organizations such as the Toledo Choral Society, Commodores, Sweet Adelines and the Suburban Singers. After his retirement, he created, developed, directed and had fun with the Maumee Senior Center choir. Dave was a man of tremendous character who pulled himself out of the darker corners of his life with strength and humility. He was grateful to be called a friend of Bill. He was quiet and gentle and when he spoke, his hands waved with the fluid grace of the piano player and choir director. His love of puns, trivia, and an encyclopedic knowledge of seemingly everything made him the most interesting man at the table, but never one to flaunt; always willing to learn something new. Crossword puzzles were a particular passion for Dave, especially when he could successfully get past the Friday level of the New York Times. He was preceded in death by his eldest son, John D. Markle, and sister Mary Markle Snyder. He is survived by his amazing wife of 32 years, Susan (Krupp DeBauche), daughter-in-law Ricki Markle, son Tim (Tracy) Markle, son Jamie (Paul Wesselmann) Markle, daughter Kristen (Kevin) Keyser and stepdaughter Mary (Pat Shuff) DeBauche as well as 12 grandchildren and eight great-grandchildren. Visitation will be held at Coyle Funeral Home, 1770 S. Reynolds Rd., on Monday, October 23, from 4-7pm followed immediately by a prayer service at 7pm. Funeral services will be at Our Lady of Perpetual Help Church, 10am Tuesday October 24. Interment Resurrection Cemetery. In lieu of flowers, donations may be made to the Maumee Senior Center.

David H. Markle, Jr, 85, died October 20, 2017 at Hospice of Northwest Ohio in Toledo, surrounded by his loved ones. Dave was born Oct 7, 1932 in Malta Ohio to David and Mary (Carr) Markle. Dave earned his BS in Education with a Music major... View Obituary & Service Information

The family of David Hunter Markle Jr. created this Life Tributes page to make it easy to share your memories.