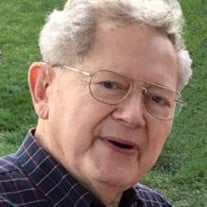 David P. Conyers born September 15th, 1937 in Shawano, WI, passed away Saturday, June 2, 2018 at the Ebeid Hospice Center surrounded by his loving family after fighting a valiant battle with Multiple Myeloma and heart disease. David was the son of the late David K. and Frances E. (Ertel) Conyers. Dave graduated from Central Catholic High School, then the University of Toledo in 1960 with a Bachelor’s degree in Electrical Engineering where he met Kathy Talaska, his love of 58 years. Dave had a lengthy career at Owens-Illinois Inc., starting part-time in 1955, going full time in 1957. Dave was assigned to pilot plant operations were he developed his skills to become a well recognized quality assurance expert. His career would take him from Toledo to Fairmont and Huntington, West Virginia, then Hayward, California, and eventually back home to Toledo. After a career of over thirty years with O-I, Dave then did international consulting for several more years for O-I, eventually retiring in 1991. Dave was a member of St. Joseph's Catholic Parish of Sylvania where he ushered. He also volunteered at the St. Louis Soup Kitchen, the Franciscan Care Center and Mobile Meals. He was a member of Brandywine Country Club and enjoyed playing golf. He also supervised the Men’s Golf league at Bedford Hills for several years. When not on the course he was on his boat. Dave and Kathy were members of Bay View and Maumee River Yacht Clubs. He named one of his boats Time Further Out, an album by his favorite jazz artist by Dave Brubeck. Dave is survived by his wife of 58 years, Kathryn, son Gregory (Cindy), daughters Elizabeth Buckingham, Christine (Mike) Glenn and grandchildren, Bradley and Bryan. Sisters, Mary Kay Duggan and Jane Fitzpatrick. He was preceded in death by his parents David K. (Francis) Conyers and son Douglas Conyers. Friends may visit at the Coyle Funeral Home, 1770 S. Reynolds Rd., on Tuesday, June 5th from 4-8 p.m. A Funeral Mass will be held on Wednesday, June 6th at St. Joseph Church, Sylvania at 10 a.m. Interment will be private. Memorials may take the form of contributions to the St. Louis Soup Kitchen or to St. Joseph School, Tuition Assistance Program. Please view and sign our online “guest registry” at CoyleFuneralHome.com

The family of David Conyers created this Life Tributes page to make it easy to share your memories.

Send flowers to the Conyers family.