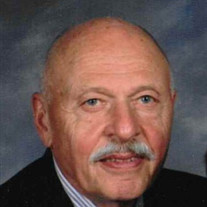 David Beekley passed away on March 14, 2020 at Charter One Living where he was in dementia care. David Carl Beekley was born in Pottstown, Pennsylvania on January 18, 1941. His parents were Dorothy Lachman Beekley and Harold Diffenderfer Beekley. His father was a tool and die maker at Doehler Jarvis, and his mother was a school secretary. Everyone who knew David loved him for his off-beat sense of humor, his generous spirit, and kind soul. His wife Cynthia says he was a true feminist, even though he wouldn’t acknowledge the title, but it is one that he truly deserved. He was a wonderful husband, father, and friend. He treated everyone equally, with kindness and care. He might swear at the machine he was trying to fix, but his frustrations were at things, not people. He was, in every sense, a true gentleman. David graduated from Pottstown High School in 1958 and was a National Merit Scholar. He received a National Lead scholarship to the University of Toledo, where he graduated in 1962 with a degree in mechanical engineering. He was a member of ROTC at UT and entered the army in January,1963. He served at Fort Riley, Kansas, in the Ordnance Division. David left the Army in 1965 and returned to Toledo. He graduated from the University of Michigan in December,1966 with a master's degree in mechanical engineering. He worked for Owens Illinois for16 years designing machinery and also assisting in the early development of solar collectors. He left Owens Illinois and went into business for himself briefly in 1982. Then he worked for Technology Concept Products and later for a machine design company in Adrian, Michigan. He finished his engineering career at Doehler Jarvis until the time they closed in 1996. He taught engineering and mathematics part time at the University of Toledo off and on and in 1998 became a full-time instructor in the mathematics department at UT. He retired in 2010. He married Cynthia Xanthopoulos in June of 1962, and they were married for nearly 58 years. David was preceded in death by his parents. He is survived by his wife Cynthia; two sons: Matthew (Amy)Beekley and grandchildren Nathan and Samantha, and Alec (Melodie) Beekley and grandchildren Alexandra and Wyatt; and his sister Linda (Bill) Jackowski. David was an avid musician and jazz lover. He loved his trombone almost as much as he loved Cynthia. He played in many bands in the Toledo area including Jack Runyan's band (Night Sessions), Johnny Knorr's band, the University of Toledo Alumni Band, the Genoa American Legion Band, Rusty’s, the Owens Community College Band, and the Polish American (PAC) Band. His sons inherited his love of music. David was a member of the Society of Professional Engineers. David tutored at McKinley School for 6 years in the Mentors in Toledo Program run by Jay Mirrow. After retirement, he and Cynthia traveled all over the world, often bicycling or hiking and collecting art with wonderful friends such as Gail and Jay Mirrow, Nancy Staub and Jack White, and Edie Rusch and Catherine Marshall. Arrangements will be made by Coyle Funeral Home, 1770 S. Reynolds Rd, Toledo. David donated his body for science research. A memorial service will be held at St. Paul's Episcopal Church in Maumee, on Saturday, March 12th at 11:00 a.m. with visitation beginning at 9:30. The services will also be live streamed at Stpaulsmaumee.org, select David Beekley Memorial. In lieu of flowers, donations in his name may be given to Hospice of Northwest Ohio, St. Paul’s Episcopal Church, Maumee, or the Owens Community College Band. Cynthia thanks all those who showed David care and love during the last years of his life, especially Comfort Keepers, Hospice of Northwest Ohio and the staff at Charter One Senior Living on Sylvania Avenue. Please leave a condolence message for the family at CoyleFuneralHome.com.

David Beekley passed away on March 14, 2020 at Charter One Living where he was in dementia care. David Carl Beekley was born in Pottstown, Pennsylvania on January 18, 1941. His parents were Dorothy Lachman Beekley and Harold Diffenderfer Beekley.... View Obituary & Service Information

The family of David Carl Beekley created this Life Tributes page to make it easy to share your memories.

Send flowers to the Beekley family.