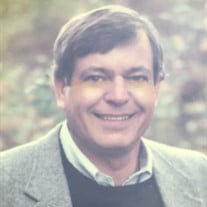 Daniel R. Donovan, 78, passed away peacefully on May 8, 2019 in his home in Holland, Ohio. He was born on June 8, 1940 in Cincinnati to Robert and Hazel Donovan. Dan was a high school three sport athlete, and was a Cincinnati Reds draft pick. He played on the Swiss National basketball team. Dan entered the seminary and later became a high school teacher at Covington Catholic. Dan’s career lead him to Owens Corning and ultimately to start his own company on April 1, 1980 with longtime friend and partner Jack Taylor. Together they built vacation condos on the gulf coast and created a management, supervisory training and development company. Dan touched many lives during his journey. His priorities were God, sobriety, community service, as well as being a husband, father and a friend to everyone he met. He was actively involved in AA as a sponsor and confidant; a volunteer with Hospice of NW Ohio, Read for Literacy, and with the Big Brothers and Big Sisters organization. Dan was a long time board member and Executive Director with the Open Door Ministry. He was in his “pastoral element” there, serving and assisting men in recovery. Dan co-founded Pacesetter Park in Sylvania, and also was an active member of his church, Community of the Risen Christ for 30 years. He enjoyed music, playing guitar, piano and singing, riding motorcycles, and taking many scenic trips with his wife and friends. Golfing with the people he loved was also a passion of Dan’s. He leaves behind many people who loved him. Surviving is his wife Joani, his children Michael (Katelynn), Patrick and Lynne; grandchildren Taylor, Shelby, Jack, Emma, Lilly, Jessa, Alyson; his sister Carol Reynolds, and first wife Elizabeth Ann Donovan. Dan will be missed by his extended family, Julia (Matt), Charlie and Ellie Dumas, several nieces and nephews and his faithful canine companions Ozzie and Rascal. A Memorial Celebration of Dan’s Life will be held on Sunday, June 9 at the Premier, 4480 Heatherdowns Blvd. from 1:00-4:00 p.m. with the service and sharing of memories beginning at 2:00. Memorial donations may be given to Hospice of NW Ohio. Coyle Funeral Home is assisting the family with arrangements. Please leave a condolence message and view Dan’s Memorial Video Tribute at CoyleFuneralHome.com.

Daniel R. Donovan, 78, passed away peacefully on May 8, 2019 in his home in Holland, Ohio. He was born on June 8, 1940 in Cincinnati to Robert and Hazel Donovan. Dan was a high school three sport athlete, and was a Cincinnati Reds draft pick.... View Obituary & Service Information

The family of Daniel Donovan created this Life Tributes page to make it easy to share your memories.

Send flowers to the Donovan family.