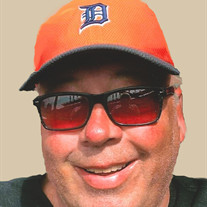 Dale Edward Stewart, age 65 and a longtime resident of Toledo, Ohio, passed away unexpectantly in Detroit, Michigan, on Wednesday, March 23, 2022. Dale was born on February 6, 1957, in Toledo, Ohio, to John Elmer and Betty Jean (Livensparger) Stewart. He was the youngest child and had 3 siblings including Scott, Kristy, and Jayne. Dale attended Swanton High School where he was an accomplished wrestler and football player. His lifelong best friend since childhood was Mike Brodbeck. He continued his wrestling career at the University of Toledo where he was recognized during tryouts for the 1976 Montreal Olympic Games. Dale married Rebecca Ann Leiby at Blessed Sacrament Church in Toledo, Ohio, on March 2, 1979. They have two sons, Jonathon Robert, and Aaron Edward Stewart, who were the light of Dale's life. Dale was a CNC Machinist by trade and worked at Interstate Trucking, Dura Corporation and Dana Corporation. He belonged to St. Catherine of Sienna Church and was a member of the Holy Name Society. While his sons were growing up, Dale actively participated as a grade school football coach and always encouraged the team to do their best and have fun playing. Dale was recognized by the Catholic Youth Organization as an outstanding contributor to grade school sports. Dale had many interests. Spending time with his grandchildren was the most important thing to him and he treasured every minute they were together. He enjoyed many sports and was an avid fan of the Dallas Cowboys, Ohio State Buckeyes, Detroit Tigers, Detroit Red Wings and Toledo Walleye Hockey teams. In addition, he was a member of the Ohio Baseball Umpires Association and enjoyed umpiring grade school and high school baseball and softball. Dale never knew a stranger. He thoroughly enjoyed meeting new people and spending time with family and friends. Dale was one of the most generous and giving people anyone could know. It gave him great joy to do for others and often made sure his grandchildren had a little spending money in their pockets. Dale was preceded in death by his parents (John and Betty); stepfather (Paul Pawlikowski); and sister (Kristy Rowland). Dale is survived by his wife, Becky (Toledo, Ohio); sons, Jonathon (Lauren) of Holland, Ohio and Aaron (Katie) of Toledo, Ohio; grandchildren, Brennan, Connor, Mackenzie, Morgan and Wren; brother, Scott (Rita) of Perrysburg, Ohio; sister, Jayne (Gary) of Blue Ridge, Georgia; sister-in-law, Renee Wall of Seattle, Washington, cousin, Leonard Camper of Genoa, Ohio; and aunts/uncles, cousins, nieces and nephews. Friends may visit at the Coyle Funeral Home, 1770 S. Reynolds Rd. on Tuesday, March 29th from 3-8 p.m. The Memorial Service will be held at Coyle on Wednesday, March 30th at 10:30 a.m. Interment will be private. In lieu of flowers, the family asks that you consider donations to the YMCA of Greater Toledo (6465 W. Sylvania Avenue, Sylvania, Ohio 43560) or Boys & Girls Clubs of Toledo (2250 N. Detroit Avenue, Toledo, Ohio 43606), as Dale cherished both organizations. Please leave a condolence message for the family at CoyleFuneralHome.com.

The family of Dale Edward Stewart created this Life Tributes page to make it easy to share your memories.

Dale Edward Stewart, age 65 and a longtime resident of Toledo,...

Send flowers to the Stewart family.