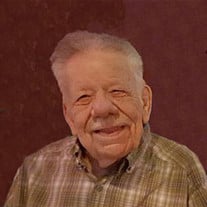 Claude “Mac” Daniel McNeely May 19, 1927 – August 20, 2018 Claude Daniel McNeely passed away peacefully at home in Waterville, on August 20, 2018. He was born in Toledo to parents Ivan and Hazel McNeely. Claude was a lifelong resident of the Toledo/Maumee area. He graduated from Libby High School and served in the U.S. Navy on the USS Terror. He was a successful businessman in the plumbing and heating trade in Toledo; until his retirement in 2000. He managed Norwest Plumbing and Heating Supply Co (Toledo, Detroit) in the 1960’s and 1970’s and then collaborated and worked with his oldest son, Mike at NorthStar Plumbing Supply Co. (Toledo) from 1980 to 2000. He was the guy to come to for any plumbing issues you had. Claude was a great bowler; winning a Pro-am bowling event beating Junior Powell; an advent gardener, became a painter after retirement, and was an all-around creative tinkerer. He loved doing jigsaw puzzles with his wife; and there was not a puzzle he could not conquer and frame. He married, Jean Ellen Carnes on December 30, 1948. His wife of 70 years survives him, along with three children, daughter, Cynthia (McNeely) Kuykendall (Carter) of Fort Worth, Texas; sons, Patrick of Waterville and James of Maumee. Also surviving are daughter-in-law, Gail (Wagner) McNeely of Johns Creek, Georgia, son-in-law, and Brian Tischinae of Toledo. In addition his 7 grandchildren, Carter Kuykendall II, Corbin Kuykendall, Cristofer Kuykendall (Corey), Jason McNeely, Jenny McNeely, Neil Tischinae (Audrey) and Gregory McNeely and 6 great-grandchildren, Britney Kuykendall, Jack and Max McNeely, and Lily, Brooke and Meadow Tischinae. He is preceded in death by his parents Ivan and Hazel McNeely and his brother Walter McNeely; along with his oldest children: Michael McNeely which preceded him in 2015 and Deborah (McNeely) Tischinae in 2010. Friends may visit at Coyle Funeral Home, 1770 S. Reynolds Rd. on Friday August 24,2018 from 11am. -1:00 pm. Interment will follow in Ottawa Hills Memorial Park. In lieu of flowers, memorial donations are suggested to Heartland Hospice or a charity of the donor’s choice

The family of Claude Daniel McNeely created this Life Tributes page to make it easy to share your memories.

Send flowers to the McNeely family.