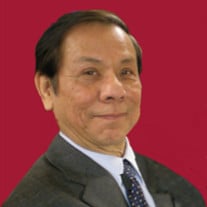 Dr. Chinda Suriyapa, a long time Toledo General Surgeon, was equally adored by his patients and health care collaborators alike. He was a humble, kind man; a scholar at heart, having graduated with the highest national honors from Mahidol University in Bangkok, Thailand in 1963. Chinda and his young wife moved to Toledo, Ohio in 1966 to complete a surgical residency at the Medical College of Ohio, and stayed to make this home. A true craftsman, Dr. Suriyapa was an innovator in his field, leading to the granting of a U.S. patent in October 1994 for a surgical medical device invention to control gastronomy leakage. He studied daily to continue to perfect his medical technique throughout his lifetime, and was a Fellow of the American College of Surgeons and a member of the Toledo Academy of Medicine. Dr, Suriyapa retired in 2012, having worked primarily at St. Charles, Riverside and St. Anne's Hospitals in Toledo. His family confirmed his death on October 1st, 2020 due to complications from an autonomic form of Parkinson's Disease, days after his 83rd birthday. Born in 1937 in Nonthaburi, an agrarian area outside of Bangkok, Chinda was the fourth of 6 children. When he was 12, due to his academic excellence, his family made a lifechanging decision to send him to live in Bangkok with his older sister, where he could pursue the best available education in Thailand. Though a naturalized citizen of the United States, Chinda continued a lifelong love for Thai culture, from its mythological origin tales to its traditional classical music. A talented musician, he played a beautiful stringed Thai instrument, similar to the hammered dulcimer, and was leader of a Thai classical music band throughout medical school. He nurtured lifelong friendships with his Thai medical school classmates, with whom he often shared his fun side at the many events, reunions, and vacations they enjoyed together. Though spread across the United States and Thailand, he and his classmates sustained an uncanny connection, sharing their successes and challenges, reciting distant youthful memories while creating newer ones, and supporting one another throughout their lifetimes. Until the end, these loyal friends were a constant presence, even from afar. He also particularly enjoyed his time with the tight-knit Thai community that developed in the Toledo area over many decades. Chinda's true love was his family. He took great pride in the accomplishments of his energetic wife of 55 years, Noi, and their son, Seksom Suriyapa. Noi was active in the Toledo arts community and Maumee Valley CDS. Seksom is a graduate of MVCDS, Williams College and Stanford Law School and is currently an executive at Twitter. Seksom's marriage to Susan J. Shrader, a fellow Toledoan, Central Catholic graduate, and independent biotechnology consultant, whom he met in the San Francisco Bay area, brought Chinda tremendous joy, particularly following the birth of his only grandchild, Sebastian. In his last decade of life, with his wife at his side, he was able to participate in and witness the maturation of his grandson into the beginnings of a teenager. An interaction from Sebastian would always lift his spirits. As his health declined in the past few years, Noi was his dedicated caregiver and cheerful companion. Dr. Suriyapa is survived by Noi, Seksom Suriyapa, Susan J. Shrader, and grandson, Sebastian Shrader-Suriyapa (living in the San Francisco area). Chinda also is survived by a large family of siblings, cousins, nieces, and nephews in his homeland of Thailand. Due to the current Covid-19 health restrictions, the family chose to limit visitation to enable close friends and family to stay safe. The family will ultimately celebrate Chinda's life through bringing his remains back to Thailand where they will have a traditional celebration. The family asks that any gifts in his memory be sent directly to Maumee Valley Country Day School in his honor.

Dr. Chinda Suriyapa, a long time Toledo General Surgeon, was equally adored by his patients and health care collaborators alike. He was a humble, kind man; a scholar at heart, having graduated with the highest national honors from Mahidol University... View Obituary & Service Information

The family of Chinda Suriyapa created this Life Tributes page to make it easy to share your memories.

Send flowers to the Suriyapa family.