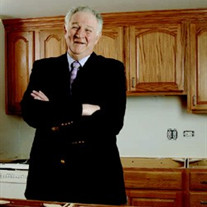 Charles William Fannin passed away peacefully on April 12 with his wife of 32 years, Deborah, by his side after enduring a short but brave struggle with cancer. Since 1984, Chuck and his wife operated Fannin Remodeling, a firm well known in the greater Toledo area and that garnered the 2007 BBB Torch Award, was designated a Big 50 Remodeler in 1990 by Remodeling Magazine and was featured in the publication on several occasions. Chuck was once voted National Remodeler of the Month and won many local awards from The Home Builders Association of Greater Toledo, including Remodeler of Year. In his free time, Chuck volunteered over the years with several local organizations including: The Toledo Home Remodelers Association, The Homebuilders of Greater Toledo, and the Penta County Board of Education. He also served as Chairman of the City of Toledo Board of Controls for 10 years, was a Boy Scout Assistant Leader of Troop 252/St. Patrick's of Heatherdowns, and was President of the St. John's Jesuit Father's Club, where his son was a student at the time. Chuck was a member of Trinity Lutheran Church of Toledo. He was born July 25th, 1950 in Norwalk, OH to Carl and Rose Fannin and was educated at Heartland Center and Western Reserve schools. He is survived by his wife Deborah (Gilbert) Fannin, mother Rose (Leimeister) Fannin, Collins, OH, children Scott Fannin, Tacoma, WA, Jason Fannin, MN, Amanda (Ed) Martin, Piqua, OH, Kurt Fannin, Toledo, OH and siblings: Donald and Cheryl Fannin, Wakeman, OH, Rebecca Magyar, Norwalk, OH, Richard and Genia Fannin, Huron, OH, Raymond and Ellen Fannin, Wakeman, OH, Michael and Lisa Fannin, Wakeman, OH, Dale Fannin, FL, Kathleen and Michael Mirtes, Norwalk, OH, Douglas and Brenda Fannin, Norwalk, OH, Jeffrey and Lisa Fannin, Collins, OH, Neil Fannin, Sandusky, OH, Matthew Fannin, Collins OH, and four grandchildren along with mother- in- law Jane Gilbert, Toledo, OH, brothers in law Tom (Desiree) and Glenn Gilbert, as well as numerous nieces and nephews. Chuck was preceded in death by his father Carl Fannin, sister Barbara Ann Fannin and nephew Paul Fannin. He served during the Vietnam War in the military police branch of the Army from 1970 to 1972, in Fort Polk, Louisiana. He enjoyed running his remodeling business and took great pride in the words "a job well done" by his clients. He was an excellent general contractor and loved to mentor his employees and see them grow in their skills. Chuck enjoyed telling jokes, was definitely a "people" person and always a friend and help mate to his neighbors, especially Mrs. Sue Schoonmaker. Deborah is thankful to all who helped her with Chuck's care throughout his illness, including family--especially Tara Paine, friends--especially Barry Ammons, The Victory Center, Sr. Gail Lambert and Fr. Tony Borgia of St. Patrick's of Heatherdowns, The OSU James Cancer and The Manor at Perrysburg--especially Julie Didion. Visitation will be held at Coyle Funeral Home 1770 S. Reynolds Road, Toledo, Wednesday, April 18 from 2-8 pm and the funeral service will be at St. Pat's of Heatherdowns Parish 4201 Heatherdowns Blvd., Toledo on Thursday, April 19 at 10:30 am. Burial will follow in Collins (Ohio) Cemetery at 2:30 pm. The family gratefully accepts memorial contributions and requests that they be made to any of the following: Donate to GoFundMe The Victory Center Troop 252

Charles William Fannin passed away peacefully on April 12 with his wife of 32 years, Deborah, by his side after enduring a short but brave struggle with cancer. Since 1984, Chuck and his wife operated Fannin Remodeling, a firm well known in... View Obituary & Service Information

The family of Charles William Fannin created this Life Tributes page to make it easy to share your memories.

Charles William Fannin passed away peacefully on April 12 with...

Send flowers to the Fannin family.