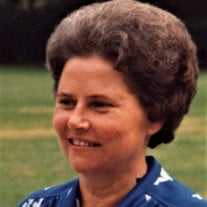 Charlee Irmen, 93, died peacefully in her sleep on April 27, 2021, following a long illness. Born Charlene Betty Gates in Jackson, Michigan, on January 11, 1928, to parents Bertha and Russ Gates, who had no other children, Charlee had a lifelong dream to have a big family. When she met Thomas L. "Sam" Irmen at Michigan State College in 1947, she found the man with whom she would fulfill that dream. Together, they made raising a happy family the focus of their lives, eventually building a family tree that included seven children and their respective spouses, 18 grandchildren and their spouses, and 9 great grandchildren. Charlee was the glue that held the family close together despite physical distance, making their homeplace on Holland-Sylvania Road the touchstone that everyone loved to return to. Her annual over-the-top Gramma Chuck's Easter Egg Hunts, which spanned dozens of acres and included cryptic clues, on-the-spot physical tests, and loads of prizes, became family legends. She and Sam were never happier than when the kids and grandkids dropped in on them. Her ability to feed the multitudes at the drop of a hat was outshone only by the laughter that reverberated from every family occasion. Charlee was a seasoned volunteer but shunned the limelight. Even with preschoolers still at home, she and her friend Marge Oatis developed and taught the first physical education program at St. Joseph's Catholic School in Maumee in the 1960s and a similar program at St. Francis Achievement School in Toledo's inner city. When all the children had started school, Charlee sought outside employment to keep her busy, starting to work as secretary to the Medical College of Ohio hospital administrator and advancing to a position as assistant to the dean of the graduate school before retiring with 25 years of service. Among her other duties, she became the chief editor of graduate student medical dissertations, also "adopting" foreign students who needed personal guidance, a touch of home cooking, or a temporary place to stay. In retirement, she was the one-woman squad doing all the behind-the-scenes administrative work that enabled Sam to lead the construction of dozens of Habitat for Humanity homes. She was devoted to both her mother and Sam's mother until their deaths at age 99 in 2000. Charlee and Sam moved to Lakes of Sylvania Retirement and Assisted Living Community in 2019 and Sam passed away later that year, promising Charlee that he would come back and get her once he got himself established. She often prayed for the day they could be reunited in Heaven with their daughter Jeannie, who died at birth. Charlee is survived by her children Pat Irmen (Bridget) of Asheville, NC, Jaine Place of Sylvania, OH, Mike Irmen (Shannon) of St. Croix, USVI, Terry Irmen (Tonia) of Sylvania, OH, JoDee Robertson (Bruce) of Daly City, CA, Betsy Damm (Andy) of Zionsville, IN, and Tom Irmen (Julia) of Holland, OH, as well as 37 grand- and great grandchildren. A memorial Mass will be held at St. Joan of Arc Catholic Church in Maumee on May 3rd at 10:30 a.m., following an hour of visitation. Due to COVID restrictions, the church requires face masks and social distancing for all attendees. The funeral Mass may be watched live or later online by going to joanofarc.org and clicking on "Watch Live." A private burial will follow the funeral Mass. Charlee requested that, in lieu of flowers, any remembrance gifts be sent to St. Joan of Arc Catholic Parish, 5856 Heatherdowns Blvd., Toledo, OH 43614, or to Promedica Ebeid Hospice Residence, c/o Promedica Foundation, 444 North Summit Street, Ste. 100, Toledo, OH 43604.

Charlee Irmen, 93, died peacefully in her sleep on April 27, 2021, following a long illness. Born Charlene Betty Gates in Jackson, Michigan, on January 11, 1928, to parents Bertha and Russ Gates, who had no other children, Charlee had a lifelong... View Obituary & Service Information

The family of Charlee Irmen created this Life Tributes page to make it easy to share your memories.

Send flowers to the Irmen family.