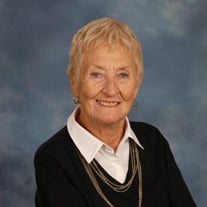 Born as the Great Depression was coming to a close, Carol Imogene Company Murphy was raised with the values of that time period. Carol was the middle child born to Edward and Ruth (Whitfield) Company in Tiffin, OH, on July 9, 1933, and passed peacefully on February 11, 2020, surrounded by her family. Growing up in Tiffin, Carol learned the value of hard work early, as she began her working life at Andrus Drugstore during high school. The sto-ry goes that one day, a young football player from Heidelberg College came into the drugstore and was served a soda from the cute blonde behind the counter. Well, it was either that or she gave him a ride to church, we aren’t sure which story is true about how Carol Company met Jack Murphy. While attending Columbian High School, Carol realized she “didn’t en-joy school,” but did enjoy cheerleading. She met Phyllis Schultz through cheerleading, and they maintained their close friendship for over 70 years. After high school, Carol attended Bowling Green State University, where she was known as the “suitcase kid.” No one knows why she had that nickname, but it is true that Carol did love to travel all throughout her life. After Carol served that young man a soda, or gave him a ride to church, they began a romance that never ended. Carol married Jack Murphy, from Barberton OH, in 1954, and they celebrated 65 years of marriage last September. The marriage to Jack would take Carol to Augusta GA, where he was stationed in the US Army, to Mount Vernon OH for a coaching job, to Heidelberg College in Tiffin, to The University of Toledo, back to Heidel-berg, and back to Toledo. Carol became a loyal and utmost fan to all the teams, but especially the UT Rockets. She made sure all the grandkids knew how to say “GO ROCKETS!” As a self-proclaimed “housewife” for many years while she raised her four children, Carol also had many jobs outside the home. After her stint at the drugstore, Carol worked as an office assistant at St. Francis De-Sales High School in Toledo, as a representative for Welcome Wagon, and as a sales associate for Lion Store/Dillard’s. Carol’s legacy to her children and grandchildren certainly includes a devotion to hard work. Throughout her life, Carol maintained an active lifestyle. After her cheerleading days were done, Carol took up tennis, bowling and golf. Her golf game progressed extensively over the years, and Carol was two time Club Champion at Brandywine Country Club. She was still golfing regularly into her 80s. In addition to the sports, Carol also enjoyed a busy social life, which included many years of playing bridge. One of her bridge groups played together over 50 years, and in fact, Carol was still playing bridge a few months ago. Whether she was playing bridge, going out with her Wednesday dinner group, or line dancing, Carol loved to be with people. Carol’s favorite activities involved the beach, whether it was Lake Erie or Florida or Hawaii. She loved sitting in the sun, walking on the beach, collecting “lucky stones”, shells and sand dollars. Carol’s adventures in Port Clinton began in the 1940s with her parents, and continued through last summer with her children and grandchildren enjoying the same beach. Many, many memories include that beach on Lake Erie. Carol was predeceased by infant grandson Nathaniel Liam Murphy and brother Tom Company. Carol is survived by her utterly devoted hus-band of 65 years, Jack Murphy, and four children: Karen Runyon of Per-rysburg, John Murphy (Jennifer Meier) of Canton OH, Linda Savercool (Tim) of Toledo, and Tim Murphy (Ann) of Toledo; grandchildren: Mat-thew Runyon of Denver, Maggie Murphy of San Francisco, Karen Mur-phy of Columbus, Jack Murphy of Hillsdale MI, Megan Yodzis (Tyler Dodds) of Savannah GA, Michelle McIntyre (Jack) of Columbus, Danny Yodzis (Karlee) of Columbus, Leah Yodzis, of Cleveland, and Sam and Ryan Murphy, of Toledo. Carol is the loving sister of Ron Company (Al-ma) of The Villages, FL. Carol leaves behind many, many cherished nieces and nephews. And yes, while we will miss the 25% discount from Dillard’s, we will truly miss our boss, our leader, our mom, our grandma. Friends may call at Coyle Funeral Home, 1770 S Reynolds Rd, Toledo, on Monday, February 17, 4 - 7 pm. Mass of Christian Burial will take place Tuesday, February 18, 10 am at St. Patrick’s of Heatherdowns Church, Toledo. The family would like to thank the myriad medical professionals who have assisted with Carol, including staff at University of Toledo Medical Center, St. Clare Commons, Mercy Hospital Perrysburg, Hospice of Northwest Ohio, Perrysburg. A special shout-out to Shawn’s Irish Tavern in Toledo: thank you for your wonderful attention to Carol for so many years. In lieu of flowers, a new athletic scholarship is being established at The University of Toledo Foundation. Friends and family can make donations to the Jack and Carol Murphy Fund at The University of Toledo Founda-tion. Contributions can be made at: give2ut.utoledo.edu/ or mailed to The University of Toledo Foundation, 4510 Dorr Street, Toledo OH 43615. Please view and sign the guest registry at coylefuneralhome.com

Born as the Great Depression was coming to a close, Carol Imogene Company Murphy was raised with the values of that time period. Carol was the middle child born to Edward and Ruth (Whitfield) Company in Tiffin, OH, on July 9, 1933, and passed... View Obituary & Service Information

The family of Carol Imogene Murphy created this Life Tributes page to make it easy to share your memories.

Born as the Great Depression was coming to a close, Carol Imogene...

Send flowers to the Murphy family.