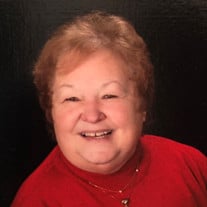 Carol Bowers has gone to a better place -- and we do not mean Vegas to play Roulette. She was surrounded by family and friends throughout her final days, sharing stories, laughs, and even a song or two. The ultimate survivor, having stared down multiple cancers, quadruple bypass, diabetes, 3 obnoxious brothers, and a steady diet of Theatre popcorn, she finally decided it was time to let the "battle be His" -- and in that, she found her peace. She often said, "All I ever wanted to be was a good wife and mother." Well, the following people can confirm she was the best at both: Survived by her husband, Larry Bowers (who she repeatedly said she would live with in a cardboard box, but grateful she didn't have to); daughter, Lori (Bob) Malfara; son, Robert (Nicole) Bowers; and 4 grandkids: Nichole and Andrea Malfara and Ava and Nicholas Bowers; brothers Jack (Monica), Herb, Gene (DeeDee) Rhoades and her sister Kathy Graven. Her interests were varied, and ranged from Ceramics and Travel to Bunko and Boggle. But, by far, her favorite "past-time" was just being with the love of her life and "visiting" with her "kids" - who were always greeted by a jovial, "Hello my honey!" No matter the weight of the circumstance, her initial response to "How you doin'?" was always a kind and gentle, "Fine." And, you know, because of that attitude (and the strength it expressed so simply yet eloquently), somehow WE were all "fine," too! We can all admit that Moms are real-life superheroes - and THAT was her super-power: Her ability to convince you that everything was going to be just "fine." Hers could have easily been a story of struggle … bad luck … even tragedy. But because of whatever mixture of faith, hope, love, family, humor, and maybe even a dash of blissful ignorance she had, hers instead was a story of JOY. Whether you knew her as Carol, Carol Lee, Aunt Carol, Leak, Sis, Ma, Gram, Grammy, or Honey, you knew JOY. With a dimple-dashed smile that could light any darkness, she showed us that JOY -- and it is for that JOY that those who had the privilege of knowing her will forever be grateful. … and that "hum" of her JOY will forever ring in our ears. She was preceded in death by her parents Glen and Ruth Rhoades, her sister Mary McGovern, and Babe, Cuddles, and Honey Bun Inky Bowers. Friends may visit at the Coyle Funeral Home, 1770 S. Reynolds Road on Tuesday, July 13, 2021 from 3-8 p.m. A Funeral Mass will begin at St. Joan of Arc Catholic Church, 5856 Heatherdowns Blvd., Toledo, OH 43614 at 10:00 a.m. on Wednesday, July 14. Committal services will follow in Highland Memory Gardens. Those wishing to make a memorial contribution in Carols name are asked to consider either St. Joan of Arc Catholic Church, St. Ursula Academy or to the American Cancer Society. Please view and sign Carol's online guest registry at www.coylefuneralhome.com

Carol Bowers has gone to a better place -- and we do not mean Vegas to play Roulette. She was surrounded by family and friends throughout her final days, sharing stories, laughs, and even a song or two. The ultimate survivor, having stared... View Obituary & Service Information

The family of Carol Lee Bowers created this Life Tributes page to make it easy to share your memories.

Carol Bowers has gone to a better place -- and we do not mean...

Send flowers to the Bowers family.