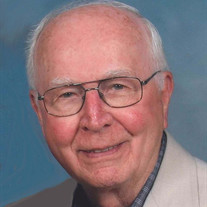 Carl Wm. “Bill” Neeb of Toledo, age 93, passed away peacefully on Wednesday, December 5, 2018, at Ohio Living Swan Creek Health Care Center. Born in Toledo, August 19, 1925, Bill graduated from Central Catholic High School in 1943. He immediately enlisted in the U.S. Navy, serving aboard two ships, U.S.S. Prestige Minesweeper and U.S.S. Richland Cargo Carrier in the Pacific theatre during WW II. Upon discharge, he attended the University of Toledo. In 1946, he married his high school sweetheart, Rita Wilhelm. They were married for 71 years prior to Rita’s passing in 2017. He was appointed to the Toledo Fire Division in 1951. His dedicated career was highlighted in 1965 when he received the Safety Council’s “President’s Award” for heroic service in saving the life of a fellow man. Rising through the ranks by way of competitive exams to the rank of Deputy Chief, in 1976 he was ultimately appointed Chief of the Toledo Fire Division. He brought a number of positive changes to the Fire Department, including final implementation of the new countrywide “Paramedic Life Squad System” of which he was most proud, as well as having all fire personnel trained to the emergency medical technician level. He created and then implemented the Fire-Police Arson Squad, the Hazardous Material Unit, high-rise firefighting procedures, pre-fire planning program, and the home inspection program. He was a life member of the Ohio Fire Chief’s Association. Upon his retirement from the Toledo Fire Division in 1980, he was named “Father of Paramedic Life Squads” by the Lucas County Commissioners and the Regional Emergency Medical Services of Northwest Ohio. And in 2016, he was honored to be placed on the University of Toledo/Medical College of Ohio Emergency Room’s Medical “Wall of Fame”. He had a particular love for his alma mater, Central Catholic High School. He served as a board member and President of its Alumni Association, chaired its “Large Gift” drive during the 1980s, and ultimately received the CCHS “Golden Shamrock” and “President’s Medallion” awards. He was a star athlete, known as “Wild Bill” on the CCHS basketball team, and is in the athletic Hall of Fame there. Active in many community projects, Bill was extremely generous with his time. He was a past member of the advisory board of the Volunteers of America, a life member of the “Old Newsboys Goodfellows Association”, a member of the North End American Legion Post #576. Bill was a charter member of the Toledo Police Department’s “RSVP” (Retired Senior Volunteer Patrol), a program designed to check on the well-being of elderly and other shut-ins. He authored many of the policies and procedures currently in the program’s existence. He served on the advisory board of the Salvation Army and chaired their Christmas committee for several years, receiving their service award for his manual outlining the procedures for their Christmas Program. A member of the Triad Council of N.W. Ohio, he was a recipient of their “Eleanor Kahle” award. And, in 2009, he was presented with the Medical Mutual of Ohio’s “Community Outstanding Senior Volunteer” gold award. Bill’s passions were Notre Dame football, Duke basketball, and golf. As a hobby, he made golf clubs for himself and others, and shared many memorable, fun-filled years of golf in the mountains of North Carolina with family and friends. He was preceded in death by his wife of 71 years, Rita (Wilhelm) Neeb. Surviving are his daughter, Kathy (David) Wernert; sons, Thomas (Sue) Neeb, and Michael (Vanessa) Neeb; his grandchildren, Michael (Shawn) Headley, Joseph Neeb, Rachel (Ian) Gagnon, Elizabeth (Greg) Bine, Michelle (Maggie) Wernert, and Aaron Bowman; great-grandchildren Lucas, Sasha, Clayton, Violet, George, Vera, Ellis, Aaron Jr., Arianna, and Derek; brother-in-law Fr. Robert Wilhelm; and five special nephews. Friends may visit at the Coyle Funeral Home, 1770 S. Reynolds Rd., on Sunday, December 9 from 12 – 6 p.m., where a Last Alarm Service will take place at 5:30 p.m. Funeral services will be held on Monday, December 10 beginning at 10:15 a.m. in the mortuary, followed by a Funeral Mass in Little Flower Church at 11:00 a.m. Entombment services will follow in Resurrection Cemetery. Memorials may take the form contributions to Central Catholic High School, or to the Toledo Firefighters Museum. The family will forever be grateful to the incredible nurses and aides at the Swan Creek Health Care Center, as well as the Ohio Living Hospice nurses for the constant compassionate care given to Bill. Please view and sign the online guest registry at www.coylefuneralhome.com

The family of Carl "Bill" Wm. Neeb created this Life Tributes page to make it easy to share your memories.

Send flowers to the Neeb family.