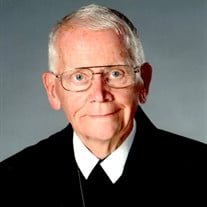 Brother James Anthony Petrait, OSFS passed from this life on February 3, 2022 at Flower Hospital in Sylvania, OH, following a brief battle with lung cancer and Covid. He was 84 years old. Brother James will be remembered by friends and family as an inspiring teacher, a committed and faithful member of the Oblates of St. Francis de Sales, and, most importantly, a man of faith. When he was given the information that he had terminal lung cancer, his first comment was, "I have to trust in God." Brother James was born on May 4, 1937, to John and Antonina (Cizek) Petrait (both deceased). He had one brother, John Jr. (Thelma) Petrait, (both deceased), a niece: Diana (Curt) Roller and a nephew, Douglas Petrait, and many cousins. Brother James graduated from the Oblate high school, Northeast Catholic in Philadelphia in 1955. Upon graduating from there he entered the Oblate Novitiate and professed his first vows on January 19, 1957. From there he went on to study at Catholic University and the University of Detroit earning a BA in psychology. Brother James was a lifelong science teacher. He taught at Salesian HS in Detroit, MI, Judge Memorial HS in Salt Lake City, UT, Benedictine HS in Detroit, MI, St. Joseph HS in Ogden, UT, and, most recently, at St. Joseph HS, in St. Croix, U.S. Virgin Islands. St. Joseph HS in St. Croix was his longest assignment lasting from 1988 to 2017, 29 years. Upon retiring from teaching Bother James moved to the Oblate faculty house at St. Francis de Sales School in Toledo, OH. Brother James had many teaching commendations and awards, too many to list here. Perhaps the one he cherished most was the OHAUS Award from the National Science Teachers Association and the OHAUS Scale Corporation, presented in 1984 in Boston, MA, at which Astronaut Sally Ride attended. The award was given in "Recognition of demonstrated imagination, creative thinking, and innovative approaches in the teaching of science, and the sharing of ideas for shaping the future of science education for all." Even though Brother James left the Virgin Islands in 2017 he had a great love for the people there and a passion to continue to serve them and the diocese from a distance. He continued to be the editor of the St. Thomas, Virgin Islands Diocesan publication the "Catholic Islander" until his death. Known for his love and expertise in computers he did all his work as the editor long distance using his computer skills. A mass of Christian Burial will be celebrated on February 10 at the chapel of St. Francis de Sales School, 2323 West Bancroft, Toledo, OH 43607. The viewing will be from 9:30AM to 10:00AM. The mass will begin at 10:00AM. Burial at Resurrection Cemetery in Toledo will follow immediately. The mass will also be live streamed at https://www.youtube.com/channel/UCVyu3cbF_jfnq2dD95z0EGw Donations in memory of Brother James may be made to the Oblates of St. Francis de Sales, PO Box 2868, Toledo OH 43606.

Brother James Anthony Petrait, OSFS passed from this life on February 3, 2022 at Flower Hospital in Sylvania, OH, following a brief battle with lung cancer and Covid. He was 84 years old. Brother James will be remembered by friends and family... View Obituary & Service Information

The family of Brother James Anthony Petrait, OSFS created this Life Tributes page to make it easy to share your memories.

Brother James Anthony Petrait, OSFS passed from this life on...