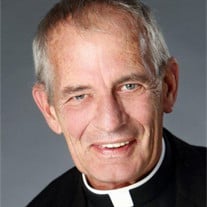 Brother Grant R. Ferris, OSFS passed from this life on January 17, 2022 at Rosary Care Center in Sylvania, OH, following a long, heroic battle with lung cancer. He was 75 years old. Brother Grant will be remembered by friends and family as an inspiring teacher, a loving family member, a committed and faithful member of the Oblates of St. Francis de Sales and a man of faith. One of his final comments was a phrase sung at night prayer in the Liturgy of the Hours, "Into your hands, O Lord, I commend my spirit." Ps 31:5 Brother Grant was born on July 16, 1946 to Grant G and Frances (Rellinger) Ferris who predecease him. He was also preceded in death by his brother-in-law, John Haymaker. He is survived by five siblings, Brother: David (Lydia) Ferris. Sisters: Barbara Haymaker, Linda (Daniel) Judge, Donna (Robert) Harrer and Ellen (Brian) Roth, and many nieces and nephews. Brother Grant's passion was teaching history to high school students. In 2001, while teaching at Cardinal Gibbons High School in Fort Lauderdale, Florida, he was designated as a Teacher Recognition Awardee in the Presidential Scholars Program. The award was presented in recognition of him as an inspiring and challenging teacher. A former principal wrote; "Brother Grant was appointed director of the athletic program. Because of his hard work and attention to details, this program was the most successful in the history of the school." In his career as a teacher, Brother Grant taught at Lumen Christi High School in Jackson, MI, Aquinas High School and Gabriel Richard High School both in Southgate, MI, and Cardinal Gibbons High School in Fort Lauderdale, FL. He held positions in these schools ranging from teaching staff, to Activities Director, Finance Administrator, Assistant Principal and Dean. Brother Grant graduated from De Sales Catholic High School in 1964, Western Michigan with a B.A. in History and the University of Notre Dame with an MSA in Administration. Brother Grant entered the Oblates of St. Francis de Sales in 1966 and made his first profession as an Oblate in 1967. He professed his final vows as an Oblate brother on September 12, 1975. He retired and entered Senior Status as an Oblate in 2016. A mass of Christian Burial will be celebrated on January 21, 2022 at the chapel of St. Francis de Sales School, 2323 West Bancroft, Toledo, OH 43607. The viewing will be from 10:30AM to 11:00AM. The mass will begin at 11:00AM and burial at Resurrection Cemetery in Toledo will follow immediately. Donations in memory of Brother Grant may be made to the Oblates of St. Francis de Sales, PO Box 2868, Toledo OH 43606. Please view and sign our online "guest registry" at CoyleFuneralHome.com

Brother Grant R. Ferris, OSFS passed from this life on January 17, 2022 at Rosary Care Center in Sylvania, OH, following a long, heroic battle with lung cancer. He was 75 years old. Brother Grant will be remembered by friends and family as an... View Obituary & Service Information

The family of Brother Grant R. Ferris, OSFS created this Life Tributes page to make it easy to share your memories.