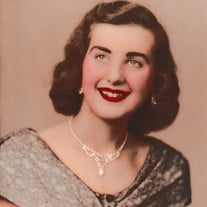 Beverly Ann Harding, 84, of Toledo, Ohio, passed away peacefully on August 11, 2019. Born November 15, 1934, in Toledo, Ohio, Beverly was the daughter of Norman and Florence (Kowalka) Kille. Growing up on the East Side of Toledo, Beverly had a wonderful time with her identical twin sister, Waverly, jumping rope, roller skating around the block, and spending summer days with their brothers at their grandparents’ cottage on Lake Erie. So identical were the twins, they insisted on dressing alike and doing everything together – one elementary school day even trading places and tricking their teacher. Beverly attended Waite High School and then spent four years working as a bookkeeper for Toledo Trust. At age nineteen she met her “one and only,” Donald Harding, at a fateful YMCA dance. Five months later, June 12, 1954, they became husband and wife, to be together their whole lives. Beverly enjoyed keeping house, family picnics, and quiet evenings. She and Donald were devout members of the Church of Jesus Christ of Latter-day Saints. Raising their three children, Beverly was a model of patience, perseverance, and love. Beverly’s life work was her family. She is survived by her children, Glenn (Bridget Weaver) and Pamela (Mark) Seely; daughter-in-law, Sally Harding; her twin sister, Waverly Strawinski; brothers, Dale (Sally) Kille and Verne (Carol) Kille, and sister, Mary Ann Vangen. Also left to treasure her memory are 12 grandchildren, 16 great-grandchildren, one great-great-grandchild, and many nieces and nephews. She was preceded in death by her husband, Donald, and their son, Keith. Visitation will be from 3-7 p.m., Friday, August 16, at the Coyle Funeral Home, 1770 S Reynolds Rd, Toledo, OH. Funeral services will be held at the LDS Chapel, 11050 Avenue Rd., Perrysburg, OH, at 10 a.m., Saturday, August 17. Interment will follow in Toledo Memorial Park. In lieu of flowers, memorials may take the form of contributions to Hospice of Northwest Ohio. Please leave a condolence message for the family at CoyleFuneralHome.com.

Beverly Ann Harding, 84, of Toledo, Ohio, passed away peacefully on August 11, 2019. Born November 15, 1934, in Toledo, Ohio, Beverly was the daughter of Norman and Florence (Kowalka) Kille. Growing up on the East Side of Toledo, Beverly had... View Obituary & Service Information

The family of Beverly Ann Harding created this Life Tributes page to make it easy to share your memories.

Send flowers to the Harding family.