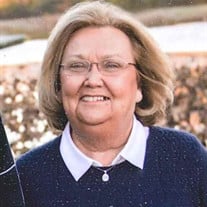 Bernetta L. Sandvik, affectionately known as “B”, passed away suddenly on December 7, 2017 at St. Luke’s Hospital. Bernetta was born on January 28, 1949 in Martinsferry, Ohio to Bernard and Lucille Brilski. She married the love of her life, Gerald Sandvik on September 23, 1972. They enjoyed 45 years of marriage together. Bernetta started her work career as a beautician. After having children Bernetta moved up to become the "CEO" of her family. Bernetta's passion was her family. As a new mom she devoted her every day to taking care of her boys, preparing wonderful meals, providing a warm and comforting home, volunteering at school and working in the lunchroom cafeteria at St. Rose School in Perrysburg. Bernetta continued her devotion of family once her grandchildren were born as they were the light of her life. She spent her time as "Grammy" going to every game, cheerleading competition, ballet performance and school activity that she could to show her love for her precious grandchildren. She was fiercely committed to caring for her husband Jerry, especially recently when he needed her most. Bernetta's love for Jerry was unmatched and shown through her selfless dedication to him. They both enjoyed traveling all over the world, including Tahiti, Bora Bora, Antigua and Florida. Bernetta is survived by her husband, Gerald, her sons, Scott (Aimee), Eric (Angie), her grandchildren, Gavin, Calleigh, Ben, Josh, and Sammy. Her sisters Leigh Ann Tate and Becky Kominski also survive, along with her nieces Emily, Lindsey, and nephew Brandon. Friends may visit at the Coyle Funeral Home, 1770 S. Reynolds Rd., Toledo, on Monday, December 11, from 2-8 p.m. The funeral will begin in the mortuary on Tuesday, December 12 at 9:45 a.m., followed by Mass at St. Rose of Lima, in Perrysburg at 10:30. Burial will be at St. Rose cemetery. Those wishing to donate in Bernetta’s memory can give to the Leukemia and Lymphoma Society, LLS.org. Please view Bernetta’s video tribute and leave a condolence message at CoyleFuneralHome.com.

The family of Bernetta Lee Sandvik created this Life Tributes page to make it easy to share your memories.

Bernetta L. Sandvik, affectionately known as “B”, passed away...

Send flowers to the Sandvik family.