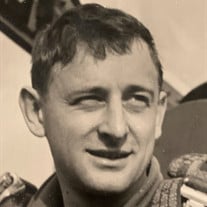 Bernard Francis Claus passed away peacefully on June 26, 2021. Ben was a devoted husband to Donna; a generous father, grandfather, great-grandfather, employer, and friend; a veteran pilot and officer in the Air Force; an artist with his camera, on canvas, and in his garden; and a graduate of St. Agnes, Central Catholic, and the University of Toledo. He was born on September 3, 1929, to William and Veronica, who preceded him in death, along with siblings Bill, Tom, and Margery. After two dates and two years of letter-writing, Ben married Donna Dresser in 1953, and they began their 66 years together stationed in Bitburg, Germany, where they started their family and stored many happily-recounted memories of life in the Air Force. When they returned to Toledo, Ben began working at Blade Printing Company, retiring in 1991. Ben's passion was for the freedom of flight, (both of airplanes and golf balls), combined with his strong faith, loyalty, commitment, and drive. We will fondly remember him for his optimism, his sense of humor and word play, as well as his unabashed determination to be fully himself without pretense wherever he went. He began his final descent with the passing of Donna two years ago; and, with the onset of dementia, he never stopped searching for her to the end. Surviving Ben are his children Michael (Janet), James, Susan (Chris) Muller, B.J. (Tammy); brother Peter; 10 grandchildren, 4 great-grandchildren and many nieces and nephews. A Funeral Mass will be held at St. Patrick of Heatherdowns Church, 4201 Heatherdowns Blvd., Toledo, OH 43614, on Thursday, July 8th at 11:00 a.m. where the family will begin receiving guests at 10:00 a.m. Interment Resurrection Cemetery. In lieu of flowers, please consider a donation to St. Pat's, Central Catholic H.S., or the Toledo Museum of Art. Please view and sign our online "guest registry" at CoyleFuneralHome.com

Bernard Francis Claus passed away peacefully on June 26, 2021. Ben was a devoted husband to Donna; a generous father, grandfather, great-grandfather, employer, and friend; a veteran pilot and officer in the Air Force; an artist with his camera,... View Obituary & Service Information

The family of Bernard Francis Claus created this Life Tributes page to make it easy to share your memories.

Send flowers to the Claus family.