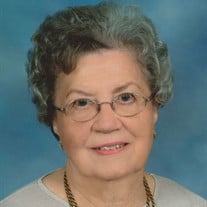 Beatrice Grosjean Schiffer The world lost a kind and gentle soul Tuesday, February 19, 2019 when Bea Schiffer transitioned into the afterlife after being a resident at the Lakes of Monclova for four years. Bea, or Beatty, as her family called her, was born in Curtice, Ohio on October 26, 1922 to Nicholas and Della (Bihl) Grosjean who preceeded her in death. Bea moved to Toledo as a young woman where she met her future husband, Edgar Schiffer, while working at Autolite during World War II. They married on her birthday in 1944 and had two children. She continued to work at various manufacturing companies throughout her lifetime until retiring in 1972. After retirement she stayed active by line-dancing at the Sylvania Senior Center, learning to make porcelain dolls and create their clothing, crocheting, and baking. She also strengthened her faith in Christ and the Catholic church. Throughout her life family remained the center of her focus as her grandchildren grew, married and created families of their own. She delighted in spending time with all of them. Bea was preceded in death by her husband Ed Schiffer, parents, her siblings Charles (Ruth) Grosjean, Dolores (Wayne) Wicks, Cecilia (Paul) Bubenko, Cyril (Eleanor) Grosjean, twin brother Bernard (Susie) Grosjean, Virginia (Harold) Henningsen, and Francis Grosjean. She is survived by her sister -in-law, Virginia Mercer Grosjean and her children Susan (James) Mahoney-Stombaugh and Daniel (Kitty) Schiffer, 7 grandchildren, 14 great grandchildren, and 2 great-great grandchildren. Visitation will be at Coyle Funeral Home, 1770 S. Reynolds Rd. on Friday, February 22, from 2-4pm and 6-8pm, with a Rosary Service at 7pm. The funeral will begin in the mortuary at 9:30 am Saturday, followed by the funeral Mass at 10am at St. Joseph Church in Maumee, Oh. Burial will be at Calvary Cemetery. The family would like to thank the entire staff at the Lakes of Monclova for their loving care, especially Karen, Tammy, and Veronica as well as the Hospice team of Heather, Nan, and Lindsey. Memorial contributions can be made to The Toledo Clinic Foundation @ ToledoClinicFoundation.org or Toledo Clinic Foundation 4235 Secor Rd. Toledo, Ohio 43623. Please leave a condolence message for the family at CoyleFuneralHome.com.

Beatrice Grosjean Schiffer The world lost a kind and gentle soul Tuesday, February 19, 2019 when Bea Schiffer transitioned into the afterlife after being a resident at the Lakes of Monclova for four years. Bea, or Beatty, as her family... View Obituary & Service Information

The family of Beatrice Mary Schiffer created this Life Tributes page to make it easy to share your memories.

The world lost a kind and gentle...

Send flowers to the Schiffer family.