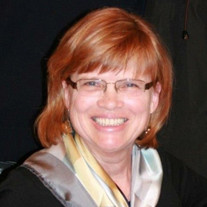 BARBARA FIALKOWSKI MCMILLEN (1946-2018) Barbara Ann Fialkowski McMillen passed away on June 2, 2018, at the age of 71 following a long and brave battle against heart failure. Barbara was born on July 18, 1946, in Philadelphia, Pennsylvania. She was the first of eleven children born to Marion Fialkowski and Leona Lankford Fialkowski. Barbara attended Frankford High School in Northeast Philadelphia and was an A student, an excellent swimmer, and performed in theater productions including playing the role of Miranda in Shakespeare’s The Tempest. Following high school, she spent half a year working at the Sears store near her home on James Street and then volunteered for VISTA, the federal Volunteers in Service to America program. She was assigned to rural West Virginia where she lived with a large family and taught in a one-room schoolhouse. Returning to Philadelphia, she lived at home while attending Temple University where she majored in English in the College of Education. Four years later she completed her undergraduate degree and decided to apply to graduate schools. Ohio University in Athens offered her a teaching assistantship in English beginning in the fall of 1969. There she met another first year graduate student William (Bill) McMillen. They fell in love and were married on January 17, 1970, a scant four months after they met. At the time of her death, they had been married for more than 48 years. At Ohio University, Barbara majored in English with a specialty in early 19th century American Literature. She minored in Film Studies. She also began publishing poetry including a book of poems entitled Framing (Croissant & Company, 1977). Her dissertation topic was the use of cinematic imagery in the poetry of the 1950’s American poet Parker Tyler. She received her Master’s degree in 1972 and her doctorate in 1976. One of the highlights of the years in graduate school was a two-month trip to Europe during the summer of 1971. Barbara and Bill backpacked through eleven countries traveling as far east as Vienna and as far west as Dublin. In September of 1976, Barbara and Bill moved to Bowling Green, Ohio, with their one-month old son Christopher. Barbara had been hired as an assistant professor in the Creative Writing Program at Bowling Green State University. She continued to publish poetry and teach graduate students in the Master of Fine Arts degree program. Barbara moved up the academic ranks becoming an Associate Professor with tenure and then Director of the Creative Writing Program for ten years. One of her early teaching innovations was introducing computers to creative writing students at BGSU. Her husband joked that she couldn’t (or refused to) replace a light bulb, but could tear down and put back together any computer. Barbara and Bill adopted a second son, Mark, who was nearly four when he came to live with his new family. Mark had special education needs that Barbara recognized because she had two younger brothers who were severely mentally and physically disabled. In the sixties, Barbara’s parents had challenged the Philadelphia school system and the state of Pennsylvania that they could not discriminate against the two boys and deny them a public education. The Fialkowski lawsuit became the legal cornerstone of the ground-breaking federal law PL 94-142 establishing free and equal public education for all children. Barbara and Bill had moved to Perrysburg in the summer of 1984. Barbara continued to teach at BGSU, while Bill continued to work as Assistant to the President at the Medical College of Ohio. Christopher attended Perrysburg schools before enrolling in and graduating from St. John’s Jesuit High School. Mark attended Perrysburg schools and graduated from Perrysburg High School. Barbara retired from teaching in 1994 when she was diagnosed with multiple sclerosis, which she battled for the rest of her life. Fortunately, there were times when she could travel, which included trips to Italy and France with her youngest sister Kate and a trip to Perth, Australia, for a wedding of the son of close friends. Barbara and Bill also managed most summers to spend a week up north in Glen Arbor, Michigan, located less than five miles from Sleeping Bear Dunes. Barbara had a love of dogs. In her parents’ house was a Collie named Louie. In Perrysburg she first had Pico, a Coton de Tulear and then Bret, an English Setter. Barbara always had a keen interest in politics and as a teenager in Philadelphia shook hands with President John F. Kennedy. She was a supporter of President Barack Obama. In 2016, she supported presidential candidate Bernie Sanders and was elected to be a delegate for Bernie at the Philadelphia Democratic National Convention. It was one of the great experiences of her life. Barbara was preceded in death by her parents and her brothers John and Walter. She is survived by her husband William, son Christopher (Aleksandra) and son Mark as well as grandchildren Marissa, Sierra, and Vuk. She is also survived by sisters Mary (Charles), Eileen (Elwood), Joan of Newburgh, Florida, and Kathryn of Philadelphia, and brothers Anthony (Cheryl), of Doylestown, Pennsylvania, Michael of Riverview, New York, James of Saylorsburg, Pennsylvania, and David of Philadelphia. The family wishes to thank the physicians—especially Dr. Thomas Schwann—nurses, and medical specialists at the University of Toledo Medical Center for their heroic efforts and kindness. The family is planning a private celebration of Barbara’s life in mid-summer. In loving memory of Barbara, please consider making a donation to her personal charity of choice, the Fialkowski Scholarship at Temple University, which grants yearly scholarships to students majoring in Disability Studies. Checks should be made out to Temple University Institute on Disabilities (denote: Fialkowski Scholarship). The mailing address is Institute on Disabilities, Temple University, Fialkowski Scholarship, 411 Student Center South, 1755 N. 13th St., Philadelphia, PA 19122.

BARBARA FIALKOWSKI MCMILLEN (1946-2018) Barbara Ann Fialkowski McMillen passed away on June 2, 2018, at the age of 71 following a long and brave battle against heart failure. Barbara was born on July 18, 1946, in Philadelphia, Pennsylvania.... View Obituary & Service Information

The family of Barbara F. McMillen created this Life Tributes page to make it easy to share your memories.

Send flowers to the McMillen family.