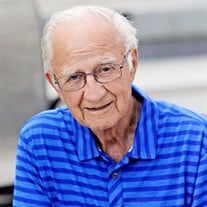 Arnold R. Dzienny, age 87 of Holland, passed away on May 18, 2019. He was born to Stanley and Helen (Jazwiecki) Dzienny on June 20, 1931. He was a graduate of Central Catholic High School and then went on to serve his country proudly in the U.S. Navy. Arnie married the love of his life, Ann M. Cousino, on June 30, 1956 and together they raised their son, Michael. “Arnie” had a long and storied career in the Telephone industry working for AT&T/Verizon. He started early on as Laborer and Pole climber working his way up to management. After his retirement, he managed the installation of the underground phone system in Poland with Ann at his side. When Arnie returned, he was always ready for the next project. He continued working in various forms of management. He ended his working career at Brandywine Country Club. He loved golfing with his son and his friends, fishing with his son and grandson and Notre Dame football. Arnie enjoyed attending his granddaughters dance performances. He also enjoyed singing in the St. Joan of Arc Choir, including performing for the Pope, in Rome 2008. He was big on his polish traditions, his heritage, faith and family were extremely important to him. He was preceded in death by his parents; grandson, Ryan M. Dzienny; sister, Helen F. Gryczewski; brother-in-law, Edward and mother-in-law Isabell Cousino. Arnie is survived by his loving wife, Ann; son, Michael (Tara) and grandchildren, Cassie Lee, Nicklaus Michael and Grace Isabella Dzienny. Friends may visit at the Coyle Funeral Home, 1770 S. Reynolds Rd., on Tuesday, May 21st from 3-7 p.m. A Funeral Mass will be held on Wednesday, May 22nd at St. Joan of Arc Church, 5856 Heatherdowns Blvd., Toledo, OH 43614 at 10:30 a.m. Interment to follow at Resurrection Cemetery. Special thanks to our many caregivers Sonya, Lasheka and her staff, and Hospice of Northwest Ohio who helped Arnie and his family through this journey. Also, Dr. Werning, M.D. and the staff at the Hickman Cancer Center. Memorials may take the form of contributions to Hospice of Northwest Ohio. Please view and sign our online “guest registry” at CoyleFuneralHome.com

Arnold R. Dzienny, age 87 of Holland, passed away on May 18, 2019. He was born to Stanley and Helen (Jazwiecki) Dzienny on June 20, 1931. He was a graduate of Central Catholic High School and then went on to serve his country proudly in the... View Obituary & Service Information

The family of Arnold R. Dzienny created this Life Tributes page to make it easy to share your memories.

Send flowers to the Dzienny family.