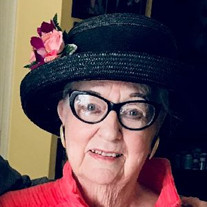 Ann Monaghan Nazar, age 93, slipped quietly away January 1, 2019 in the arms of her daughter, Jennifer, surrounded by the love of those who cared for her deeply. Only 53 days after the passing of her husband of 69 years, Edwin Nazar, her wish... View Obituary & Service Information

The family of Ann Monaghan Nazar created this Life Tributes page to make it easy to share your memories.

Send flowers to the Nazar family.