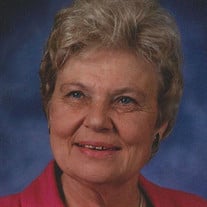 Ann Bragg passed away August 5, 2020 in Toledo, Ohio at the age of 85. Born February 25, 1935 in Boston, Massachusetts to Howard R. and Alice E (Ressler) Brentlinger, Ann grew up in Belmont, Massachusetts where she graduated from Belmont High School. She attended Otterbein College in Westerville, Ohio where she met the love of her life Ralph her freshman year. Ralph proposed to Ann while crossing the Atlantic Ocean on a trip with his parents to Europe and the Holy Land. He had originally intended to propose on the Eiffel Tower but was informed in Boston that he would not be able to carry the engagement ring through customs in France. Ann and Ralph were married in Boston, Massachusetts in the spring of their senior year. After Graduation from Otterbein, they moved to Cambridge, Massachusetts where Ralph attended Harvard Law School. After Ralph completed law school, they moved to Toledo, Ohio where Ralph had accepted an offer of employment. While Ann primarily stayed home to serve as a devoted wife to Ralph and tireless mother to her four children, she remained extremely active in the Toledo community. Ann was a certified teacher and taught as a substitute teacher for Toledo Public Schools and with the Headstart Program for Rossford Schools. Ralph and Ann were active members of Park Congregational Church for over 50 years. At Park, Ann taught Sunday school, served on various boards, committees and circles, coached girls’ basketball, and volunteered as a leader of the youth group (including mission trips to New England and West Virginia). Outside of Church, Ann was active as a volunteer for many social service agencies. She was a volunteer for the Toledo Society for the Blind and received its Volunteer of the Year award in 1998. She served on the Board of Grace Community Center. She also volunteered with Feed Your Neighbor, Mobile Meals, St. Paul’s Community Center, Care for the Homeless, Read for Literacy, Cub Scouts, Maumee Children’s Center, American Cancer Society, and the Toledo Museum of Art. She also loved the Metropolitan Park District of the Toledo Area where she served as a volunteer naturalist and trail partner for children and persons with special needs. She was active with the Toledo Bar Association Auxiliary, volunteered at her children’s schools and racked up innumerable miles and hours driving her children/grandchildren (and their friends) to sporting, social and school events. She was very proud of the certificate she received from Mayor Harry Kessler for her role in naming the Seagate Centre in downtown Toledo. After many enjoyable summers at Miley’s Resort at Lake Bellaire in northern Michigan, Ann and Ralph bought a cottage at Devil’s Lake in lower Michigan. They spent many weekends and summers at the lake and were happiest when they could entertain family and friends at their cottage. Ann loved the outdoors, animals and especially the many dogs that were part of her family over the years. In her later years, she enjoyed traveling the country with the Otterbein Alumni Association, singing with the Senior Singers at the Maumee Senior Center, as well as the Swan Creek Singers after moving there. Ann was predeceased by her husband of 60 years, Ralph, and her siblings, Howard, Caroline and Pauline. She is survived by daughter, Cathy (Steve) Leinbaugh of Fort Meyers, Florida; sons, Michael (Sharon) Bragg of Holland, Ohio, James (Holly) Bragg of Waukee, Iowa, and John (Janet) Bragg of Perrysburg, Ohio; grandchildren, Courtney (Mitch) Miller, Jeff (Heather) Leinbaugh, Cara, Matt, Lindsay, Caitlynn (Steve) Akin, Nicholas (Toshiko) Bragg, Julia, Christopher, Jessica and Jacob; great-grandchildren, Mason and Ella. Visitation will be held from 3:00 p.m. to 7:00 p.m. on Friday, August 14, 2020 at Coyle Funeral Home, 1770 South Reynolds Road. A Funeral is scheduled for 11:00 a.m. on Saturday, August 15, 2020 at Park Congregational Church, 1456 Harvard Blvd., Toledo OH. The Funeral service will be recorded and posted on the Friends of Park Church Facebook page shortly after the service. Interment will be private. Due to COVID-19, please wear face masks and practice social distancing throughout the visitation and funeral service. The family would like to extend a special thank you to the staff of Ohio Living at Swan Creek for their care of Ann over the last five years. Memorial donations may be given to Park Congregational Church. Please view and sign our online “guest registry” at CoyleFuneralHome.com

Ann Bragg passed away August 5, 2020 in Toledo, Ohio at the age of 85. Born February 25, 1935 in Boston, Massachusetts to Howard R. and Alice E (Ressler) Brentlinger, Ann grew up in Belmont, Massachusetts where she graduated from Belmont High... View Obituary & Service Information

The family of Ann Louise Bragg created this Life Tributes page to make it easy to share your memories.

Send flowers to the Bragg family.