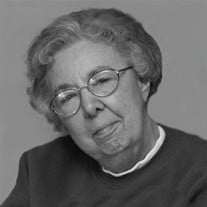 Angeline Marie (Mandery) Koberstein Ringenbach, was born in Toledo, Ohio to Helen (Karst) Mandery and Rudy Mandery on February 28, 1929 and passed away January 17, 2022. She was preceded in death by her parents and her sister, Joan (Mandery) Ryan. A lifelong Toledo resident, after Angie graduated from Central Catholic High School in 1946, she soon started her career at Bostwick Braun, retiring in 1993. She had a wonderfully varied life filled with her favorite things: skiing, bowling, travel, and much more. Angie was also an avid board game and card enthusiast with a competitive streak that always kept family time entertaining. In 1968, she married Paul Koberstein who was living with his stepson, Ted Bacho Sr. Angie welcomed Ted as her own, later in life often introducing him as her son. Paul passed away in 1980, and some years later, Angie found companionship with Frank Ringenbach whose first wife Catherine had also preceded him in death in 1981. They married in 1986 and enjoyed a life full of family and travel. Frank passed away in 2004. Angie never had children of her own. But she had the blessing of 2 happy marriages and a large extended family, including that of her sister Joan with husband Jerry Ryan. Angie's generosity and warm welcome touched the lives of many throughout the Bacho, Koberstein, Ringenbach, and Ryan families. She will be remembered for her devotion to family and the legacy of love that she leaves to many children, grandchildren, and great-grandchildren. A special thanks to Ted Bacho Sr., Deborah (Ryan) Gedert, and Kristin (Ringenbach) Shordt for their care and attention in helping to make Angie feel both loved and comforted in her last few years. A Mass of the Resurrection will be held on Friday, January 21, 2022 at 10:30 am in Corpus Christi University Parish, 2955 Dorr St, Toledo with a small reception at the church immediately after. Entombment at Calvary Cemetery will follow at a later date for immediate family. In lieu of flowers, donations can be made in Angie's memory to Helping Hands of St. Louis, 443 Sixth Street, Toledo, OH 43605.

Angeline Marie (Mandery) Koberstein Ringenbach, was born in Toledo, Ohio to Helen (Karst) Mandery and Rudy Mandery on February 28, 1929 and passed away January 17, 2022. She was preceded in death by her parents and her sister, Joan (Mandery)... View Obituary & Service Information

The family of Angeline Ringenbach created this Life Tributes page to make it easy to share your memories.

Send flowers to the Ringenbach family.