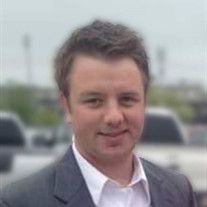 Andrew John McCarthy, age 33 of Toledo, passed away at home on May 18, 2018. He was born to John McCarthy and Dawn Weideman on March 27, 1985. He was a graduate of St. John Jesuit High School where he was active in the Wrestling Program. After highschool, Andy moved to Chicago where he attended Loyola University. During his time in Chicago, Andy formed many special friendships with his TKE fraternity brothers. Post undergraduate, Andy decided to pursue his lifelong interest in law at the University of Toledo where he received his JD/MBA. Andy’s life calling was to work as an attorney advocating for the rights of others. Andy worked as both a public defender and also started his own practice, Law Office of Andrew J. McCarthy. According to the Honorable Judge Cook “Andy began his journey working to provide his clients not only legal representation but he also understood his role as a counselor at law. He poured his heart into each case and each client. His initial legal mentor was local attorney, Richard Hasbrook. He soaked up everything that he could. The legal mentorship evolved into courtroom partnership where they worked seamlessly to represent hundreds of indigent clients, giving them commendable legal representation that was routinely acknowledged by the court. Andy went on to prove himself as a worthy legal representative before many local judges in multiple jurisdictions building last friendships throughout the legal community. Recently, due to the skills, knowledge of resources and his legal reputation for working with the addicted population that Andy had built through his years of practice, he became the most recent addition to the Lucas County Drug Court Program as assigned Public Defender. Andy’s addition to the program was in itself a valuable resource. Andy most recently lived out a career high moment of being part of a legal team representing a teen who was acquitted of a most serious of offenses. Andy was beyond grateful to have had the opportunity to work with and learn alongside local renowned defense attorney Ronny Wingate.” Andy was a member of the Toledo Bar Association where he was active in the annual Grid Iron Show. Of the things Andy enjoyed most, spending time with friends and family was at the top of this list. His free time was often spent entertaining those he loved most through lively storytelling. Andy had a gift for always lighting up the room and making those around him feel heard and valued. Andy was preceded in death by his paternal grandparents, Tom and Jane McCarthy; maternal grandparents, John and Judy Weideman and his uncle, Thomas Dixon. He is survived by his mother, Dawn Weideman; father, John McCarthy; sister, Erin (Patrick) McCarthy-Cline; brother, Michael McCarthy and his buddy and canine companion, Teddy; Aunts and Uncles Timothy (Josette) McCarthy, Jim (Diane) McCarthy, Raymond (Jennifer) McCarthy, Laura Dixon, Michael (Linda) Weideman, Ron (Nona) Weideman, Dana (Eric) Toth and dozens of cousins. Friends may visit at the Coyle Funeral Home, 1770 S. Reynolds Rd., on Tuesday, May 22nd from 2-8 p.m. Funeral services will be held on Wednesday, May 23rd beginning at 9:15 a.m., in the mortuary, followed by a Funeral Mass at Our Lady of Perpetual Help Church at 10 a.m. In lieu of flowers, donations can be made to the Indigent organization of your choice. Please view and sign our online “guest registry” at CoyleFuneralHome.com

Andrew John McCarthy, age 33 of Toledo, passed away at home on May 18, 2018. He was born to John McCarthy and Dawn Weideman on March 27, 1985. He was a graduate of St. John Jesuit High School where he was active in the Wrestling Program.... View Obituary & Service Information

The family of Andrew McCarthy created this Life Tributes page to make it easy to share your memories.

Andrew John McCarthy, age 33 of Toledo, passed away at home on...

Send flowers to the McCarthy family.