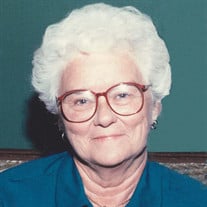 Alice Mae Biniker, 92, passed peacefully and joined her husband of 67 years, Bernie, on April 18, 2019. Alice was born on June 20, 1926 in Toledo to Frank and Ann (McCarthy) McCarthy. She was quite the revered matriarch – loved by her children Dr. Barry (Holley) Biniker, Deb Baymiller, and Nick (Jane) Biniker and her eight grandchildren, their spouses, and her nine great-grandchildren. Alice grew up in the Old South End of Toledo and attended Immaculate Conception Grade School. She later attended Central Catholic High School which led her to meet Bernie. At the time, he was dating her older cousin and Alice recalls that she was the “pipsqueak” in the backseat as he drove them both to school on his way to Libbey High School. Little did he know that when he returned from the war in 1946, his love affair with Alice would begin. They eloped on September 9, 1950 to tropical Angola, Indiana and shortly thereafter began their family. After being the backbone of the family and raising their children, Alice worked for many years as a hall monitor at Bowsher High School – a job that she loved. Later in life, she was called into her son’s dental practice to answer the phone for one day, which turned into 20 years as the smiling face at the front desk. She loved all of the patients and they loved seeing her. Alice was the full embodiment of a true Irish Catholic woman – strong, loyal, faithful, and eternally witty. She had endless time for those she cared about and no time for those she didn’t – and she was fine if you knew which group you were in! There was just something special about her to which people were drawn. She was quick with a new (often inappropriate) joke, loved to tell a good story, and always hosted a great happy hour if you happened to stop by about the right time. She loved her family deeply and never missed an opportunity to show it – there was never a doubt if she would be front and center for piano recitals, birthday parties, sporting events, readings at Mass… you name it. She really loved life and she made all of us better for it. Ever since Pop passed in February of 2017, Alice has been ready to be with him again. So as much as we will miss our feisty Non, we know she is happily by his side again, telling jokes and enjoying happy hour Manhattans. Alice is survived by her younger brother, Francis (Mac) McCarthy, whom she loved dearly. The family will receive guests from 3-7pm on Tuesday, April 23rd at Coyle Funeral Home, 1770 S. Reynolds Road. On Wednesday, a Funeral Mass will be held at 10 a.m. at Our Lady of Perpetual Help Church, 2255 Central Grove, Toledo, OH 43614, prior to her burial at Calvary Cemetery. In lieu of flowers, donations can be made to Hospice of Northwest Ohio or St. Jude Children’s Research Hospital, a charity that she was devoted to for many years. Please view and sign our online “guest registry” at CoyleFuneralHome.com

The family of Alice Mae Biniker created this Life Tributes page to make it easy to share your memories.

Send flowers to the Biniker family.