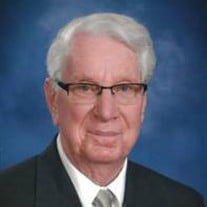 Alfred Edgar Smith, age 90, of Waterville, passed away peacefully on July 12, 2019. He was born on August 16, 1928, to Catherine Schlagheck and Alfred Smith Jr. in Toledo, Ohio. This bundle of joy arrived on his mother’s 47th birthday and his five sisters instantly adored him. Al graduated in 1947 from Central Catholic High School. Shortly after, he joined the U.S. Army and served in Korea for 17 months in the 95th chemical supply company. On April 4, 1959, Al married Rita Marie Richardson and they were married 38 years until her passing on July 14, 1997. They had three children together. Al and Rita loved to go to musicals together, were very involved at church, and enjoyed Rita’s excellent cooking! Al’s successful career at DeVilbiss Manufacturing Company from 1959-1990 allowed him to enjoy being a chemist, metallurgist, and materials engineer. His true passion was spending time with his children and grandchildren who brought him much joy. His nieces and nephews all played a special part in his life too! In his later years, Al met Betty Perry and they shared a beautiful relationship. Together, they enjoyed big band music and cheering on the Detroit Tigers. Al is survived by his two children Michael, Kathy (Reyes S.) Reyes, and his six grandchildren, Chris and Jimmy Reyes; Kelsey, Zach, Anna, and Margaret Smith. Al was preceded in death by his wife Rita, son David, and sisters Margaret Smith, Kathryn Smith, Geraldine Stork, Rose Londeree, and Angie Olsen. Visitation will be held at St. Joseph’s Catholic Church in Maumee, Ohio, on Friday, July 19, 2019 at 9:00 a.m. until the time of Mass at 10:30 a.m. Interment will be at St. Joseph’s Cemetery immediately following. All family and friends are invited to a luncheon at St. Joseph’s Family Center. In lieu of flowers, memorial contributions may be gifted to St. Joseph Church or Hospice of Northwest Ohio. Al’s family wishes to thank all friends, nieces, nephews, Fr. Keith Stripe, Dr. Allen Schwisow, and staff of Hospice of Northwest Ohio for their support during Al’s illness the last three months. Coyle Funeral Home is assisting the family with arrangements. Please leave a condolence message at www.CoyleFuneralHome.com.

Alfred Edgar Smith, age 90, of Waterville, passed away peacefully on July 12, 2019. He was born on August 16, 1928, to Catherine Schlagheck and Alfred Smith Jr. in Toledo, Ohio. This bundle of joy arrived on his mother&#8217;s 47th birthday... View Obituary & Service Information

The family of Alfred Edgar Smith created this Life Tributes page to make it easy to share your memories.