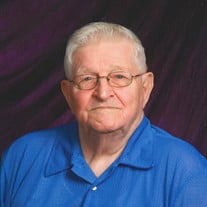 Al H. “Whitey” Smith, age 87 of Toledo, passed away on July 23, 2017. He was born to Herbert and Mamie (Miller) Smith on February 8, 1930. Whitey’s early jobs included earning money sweeping steps at St. Mary’s Church, working for his uncle at his grocery store and selling newspapers on street corners where someone once gave him a $5 tip and he in turn ran home and gave it to his mother. He also worked on his sister and brother-in-law’s farm in Pioneer, OH for extra money for his family. He was a 1948 graduate of Woodward High School and then he went on to serve his country proudly in the U.S. Army during the Korean War. After his discharge, he began working at Samson’s bar, Atlas Paving and Textile Leather. He then spent the rest of his career working as a Carpenter until the time of his retirement. Whitey was an Elder and Council member for Harvest Tabernacle Church, coached basketball, played darts and “he used to say he could walk on water” because he loved to go ice fishing with his brother, Roland. He loved to tell funny stories and jokes. Whitey was preceded in death by his wife, Alice (Cordell); son, Leo Langchied, Jr.; parents; siblings, Sylvester (Alma) Smith, Caroline (Nelson) Bexten, Gertrude “Aunt DoDo” (Charles) Lentz, Lucille (Russell) Boutwell, Katherine (Chet) Brozozwicz, Mildred “Aunt PeeWee” (Wilfred) Frelin, Roland and Frederick “Fritz” Smith. He is survived by his loving wife of 23 years, Charlotte; son, Michael (Stephanie) Cecil; daughters, Michelle (Ralph) Johnson, Sharon Hodgson ; 13 grandchildren; 14 great-grandchildren and sister-in-law, Lois Smith. Friends may visit at the Coyle Funeral Home, 1770 S. Reynolds Rd., on Thursday, July 27th from 3-8 p.m. Funeral services will be held at the Harvest Tabernacle Church, 430 E. Florence Ave., Toledo, OH 43605, on Friday, July 28th at 11 a.m. where the family will begin receiving guests at 10 a.m. Rev. Garrett Fitzpatrick officiating. Interment will follow at Toledo Memorial Park. The family would like to extend a special thank you to the staff at Hospice of Northwest Ohio, the Toledo Hospital Neuro ICU and James Bingle, M.D. and nurse Michelle Myers at Promedica Physicians Cardiology for their compassionate care. In lieu of flowers, contributions can be made to Harvest Tabernacle Church or The Joe and Jane Project, joeandjaneproject.org Please view and sign our online “guest registry” at CoyleFuneralHome.com

The family of Al H. "Whitey" Smith created this Life Tributes page to make it easy to share your memories.